Agriculture in Africa: Impact of COVID-19 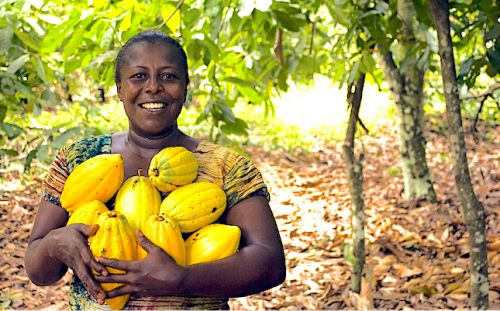 The pandemic is reminding us that women are key to a green revolution in Africa.

( ACT AFRIQUE ) - Initially, the COVID-19 pandemic did not threaten food availability in sub- Saharan Africa due to adequate reserves for most staple crops in 2019. Access to food was instead the focus as borders closed and global supply chains

weakened. Almost a year after the pandemic outbreak, it is now evident that agriculture production and its allied industries are struggling. Prices increased for most staple foods in many countries, thereby worsening the region's food and security situation. Last year, the FAO estimated that 235 million people struggled to have regular access to nutritious and sufficient food in Africa. This health crisis has forced many more people into this group.

In Ghana, the consumer price index for food and non-alcoholic beverages increased by 8% from March to December 2020

Farmers, food processors and marketers also faced challenges. Border closures negatively affected input supply chains and the processing capacity of most small units. In many countries, major domestic logistics disruptions persist due to curfews and other policies intended to curb the virus's spread.

Nonetheless, men and women are not confronted with the same constraints in the agriculture sector. Even before the outbreak of the pandemic, women faced more hardship compared to men. Gender bias and other challenges persist, stripping women of agency and controlling productive resources in the sector. The ongoing pandemic's effects should remind all stakeholders that agriculture must be gender transformative if there is any chance for sub-Saharan Africa to achieve zero hunger by 2030 as per goal 2 of the Sustainable Development Goals.

Agriculture from a gender perspective

Despite governments and their partners' efforts to reduce gender inequalities, gaps remain between legislation and implementation in the agriculture sector. In Ghana, for example, most farmers are women, particularly in rural areas where over 70% are engaged in agricultural value chains. They produce 70% of the food stock consumed by households. 95% of them are involved in some form of agro- processing. On the other hand, men mostly produce cash crops for exports.

Notwithstanding their importance in the region's food security, women are still disproportionally disadvantaged compared to men. They face significant challenges in access to land and credit, transportation, education, technology, policies, and many more. Moreover, women have more considerable work burdens since they must also meet the demands of care responsibilities at home.

A gender analysis: Ghana, a case in point

An analysis of various areas of the agro-food sector in Ghana reveals grave disparities between women and men conditions and their effects on production outcomes.

“Some of us are able to turn those infertile lands to fertile lands by employing good agricultural practices, but when that happens, the land is taken away from us by the men and replaced with other infertile land”.

This was the statement of a rural village woman in Ghana during a cross-section of women farmers during field visits of an FAO study. The land issue is a gender gap issue in Ghana. For example, men have 3.2 times more of total farms than women and 8.1x more medium and large farms2. This disparity indicates a marked bias against women's access and control of land, particularly in rural areas of the country.

Men focus on cash crops (e.g., cocoa, cotton, palm trees) mainly destined for exports, while women produce 70% of food crops mostly consumed domestically. Yet, women are often merely paid or unpaid laborers on farms. This situation has many implications. First, they have no control over critical decisions such as allocation of crops for commercial activities or household consumption. For example, while women have agency over food utilization in households, they do not control its production. Also, they are disadvantaged from cash/industrial crop intervention programs that promote income.

Gender and food processing and marketing

While men primarily undertake fish production in Ghana, women are mostly involved in the processing and marketing of fish products. In this area, women face gender constraints that exacerbate their activities or erode their profit margins. For example, current technologies used in smoking fish are archaic, require hard work, and pose health risks to women. On the other hand, development programs favor technology implementation in fishing production where men have a larger presence.

In another example, while women carry farm produce on their heads to their homes, men are more likely to use bicycles, motorbikes, or donkey carts.

Overall, access to finance is one of the critical constraints in agricultural production in sub-Saharan Africa, but women are more excluded. Agricultural produce traders are mostly women, yet official credit programs do not usually cover their trading activities, viewed as informal. Although access to credit has improved, mainly due to the advent of microfinance institutions, challenges remain. Women have limited access to collateral because assets are often registered in their husbands' names in rural areas. Also, distance from formal financial establishments represents a barrier to access financial services.

Division of labor based on gender norms

Men and women play different gender roles across agricultural commodity value chains. This promotes disadvantages for women who are limited to performing labor-intensive and time-consuming tasks that may not be financially rewarding. Furthermore, responsibilities in the sector are distributed according to types of crops and livestock whereby women produce less valuable crops and livestock.

Prevalent division of labor based on gender norms prevents women from engaging in profitable activities in the sector.

Nevertheless, these divisions of labor are still not well defined because, in addition to their tasks, women still support men in their work. Women provide unpaid labor on fields grown by their husbands and feed or clean their livestock.

Women are underrepresented in rural development planning committees. This circumstance creates a gender bias against women farmers because men and women have differing needs due to their roles and responsibilities. For example, in the marketing and distribution value chain, women may need access to clean public restrooms during their menstrual periods when they travel to supply centers. The nonexistence of this sanitation provision negatively affects women and their productivity.

What avenues could stakeholders explore to achieve a fundamental change in the sector?

It is an excellent start to empower women engaged in agriculture, but this is an underwhelming act. To truly bring about a green revolution in Africa, we all should adopt a gender lens, and every program in the sector must be gender transformative. In other words, we must design plans to reduce gender gaps and barriers in agency and control over resources in agriculture. There are many actions that we could take to begin the process of rethinking agriculture development in Africa. These include:

Let’s grow from empowerment to transformation

Stakeholders are increasingly gender intentional in programs; however, for Africa to truly become the world's breadbasket, every agriculture investment— irrespective of its size— must be gender transformative. In other words, we must alter formerly neglected areas of the sector, such as data-gathering, policymaking, and technology, with the objective of increasing women’s access and control of resources. This challenge cannot be achieved by anyone alone. Investors, governments, donors and other institutions should seek closer collaboration with local expertise (e.g., researchers, innovators, policy makers, consultants, and community leaders) in order to revolutionize agriculture in Africa.