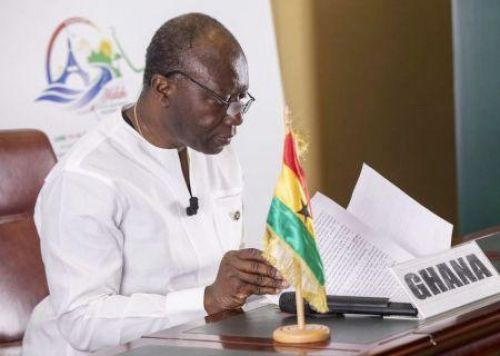 (Ecofin Agency) - In 2018, the country announced it would not extend the 3-year program signed in 2015 by former president John Mahama. Two years later, it turned to the IMF for a US$1 billion assistance amid the coronavirus pandemic. Despite the economic challenges Ghana is still facing, authorities are committed to their “Beyond Aid” agenda.

Ghana will manage its debt without going to the International Monetary Fund (IMF), Finance Minister  Ken Ofori-Atta (photo) said during a press conference in Accra, Thursday (May 12).

“We have committed to not going back to the fund because… the fund knows we are in the right direction…It's about validating the program we have in place and finding other ways of handling our debt," the government official said.

The statement comes amid inflationary pressures that prompted local authorities to take austerity measures. The measures included a 30% cut in Ministers and the President of the Republic's salaries, the suspension of some official trips, and the prohibition for ministers to import cars. The measures were backed by a reduction in fuel prices but the cost of necessary goods kept rising with inflation going from 19.4 percent in March to 23.6 percent in April.

Over the past few years, Ghana’s public debt has risen significantly. Authorities took a set of measures to address the situation, but to no avail. The latest of those measures is the electronic levy, which is opposed by Ghanaian civil society.

In 2018, the country unveiled an ambitious agenda, “Ghana Beyond Aid” to free it from international aid. At the time, President  Nana Akuffo-Addo said that his country would not extend the three-year extended credit facility approved in 2015. He promised to remain committed to fiscal discipline to avoid resorting to an IMF bailout program again.

However, in 2020, amid the covid-19 crisis, the country secured US$1 billion in aid from the fund. The amount was one of the largest support the IMF granted in Sub-Saharan Africa during the period. For analysts, the coronavirus episode proved Ghana still has a long way to go in its “Beyond aid” agenda.