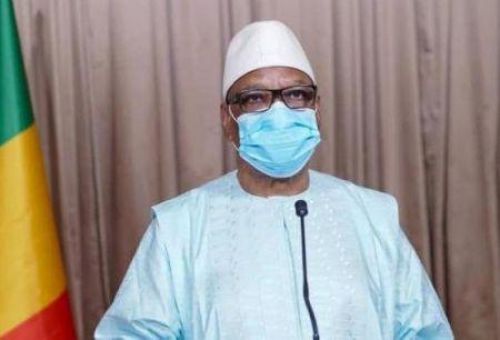 (Ecofin Agency) - The government of Mali announced it will mobilize at least CFA500 billion to support the economy and assist the populations most vulnerable to the coronavirus, while drastic measures are being taken to limit its propagation in the country.

President Ibrahim Boubakar Keita, in an address to the nation on April 10, announced the government has decided several additional measures including a curfew, the closing of markets and supermarkets before 5 pm, the reduction of daily work time in public administration, in addition to the CFA500 billion response plan.

The President also announced he will invest three months of salary in helping citizens while the Prime Minister is ready to invest two months of salary. These sacrifices will help quickly mobilize CFA100 billion to provide food, water, and electricity to poor households in 703 communes between April and May.

One Citizen, one face mask

“One Malian, one face mask” is an initiative to provide face masks to people who cannot afford to buy masks. President IBK said the government has ordered 20 million reusable masks that are expected to be delivered by next week. Local textile companies and clothes makers are also involved in this operation.

A guarantee fund and support measures for SMEs

In addition to measures to support SMEs in the country, the Malian government is mobilizing CFA20 billion for them. Bamako wants to clear all its domestic debt due on 31 December 2019. The payment of mandates for the year 2020 up to CFA100 billion will also be “very quickly” settled to loosen the grip on SMEs.

On the other hand, we learn that tax rebates are planned, and to avoid burdening the State treasury, this tax relief will be done on a case-by-case and sector-by-sector basis, to “save jobs.” Also, importers will benefit from a reduction in customs duties on necessities.

BCEAO also invited commercial banks in the sub-region to grant a 3-month renewable moratorium to companies hit by the crisis.