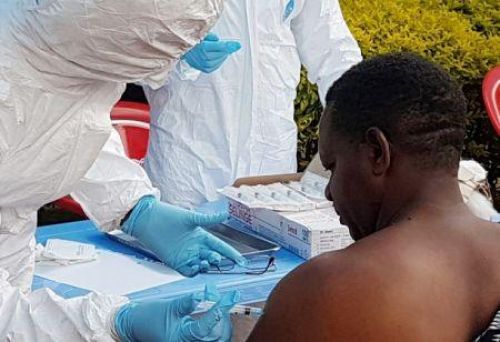 Authorities in DR Congo have kicked off a vaccination campaign against the Ebola virus disease. The information was made public via a WHO statement yesterday October 13.

The government has deployed nearly 1,000 shots of the rVSV-ZEBOV vaccine to Goma, in the North Kivu capital, and another 200 shots to Beni. Doses are firstly administered to people at risk, using the "ring vaccination," which is a strategy that vaccinates the contacts of confirmed patients, and people who are in close contact with those contacts. WHO says "more than 170 contacts have already been identified.”

"The Democratic Republic of Congo is spearheading efforts to stop this latest Ebola resurgence, building on the expertise gained during the previous outbreaks," said the WHO regional director for Africa, Dr. Matshidiso Moeti.

The country still has 12,000 vaccines in stock, ready to be used when needed, and the UN agency said it had begun shipping "five tons of response materials, including therapeutics, personal protective equipment, and laboratory equipment. WHO has also made $200,000 available to the DRC government to support the campaign.

As a reminder, a child with symptoms of Ebola died in the Butsili health zone (North Kivu) last October 6. Two days later, results confirmed he indeed had Ebola. A month earlier, three other patients, who were members of the same family and lived in the same community as the child, had died after showing similar symptoms.

DR Congo has already experienced 12 Ebola outbreaks, the last of which affected 12 people and killed six. Beni, a town near the area where the latest case was detected, was the epicenter of an outbreak in the past. Tests are being conducted at the main laboratory of the country's National Institute for Biomedical Research and results are expected this week.