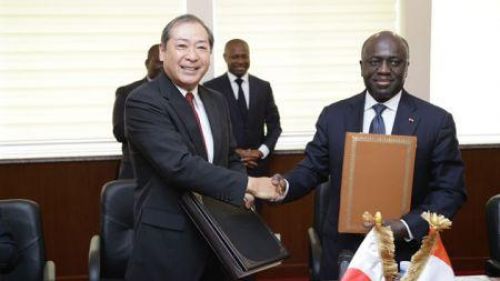 (Ecofin Agency) - Japan’s ambassador to Côte d’Ivoire, Hideaki Kuramitsu, and the Ivorian Minister for Foreign Affairs, Marcel Amon-Tanoh, signed on Jan 13 in Abidjan, a deal for reciprocal promotion and protection of investment.

“This agreement will pave the way for new prospects in the already excellent relations between Côte d'Ivoire and Japan, and will encourage Japanese economic operators to invest more in the country (Côte d'Ivoire, ed) which is a gateway to a vast West African market of more than 350 million consumers,” the Ivorian official said.

For his part, Hideaki Kuramitsu reaffirmed the Japanese government's commitment to do everything possible to support Côte d'Ivoire's progress towards a more competitive economy.

According to data from the Ivorian Ministry of Economy and Finance, in 2017 trade between the two countries amounted to CAF126.572 billion (about $214 million).