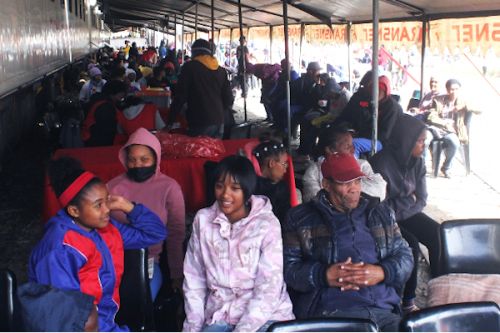 (AfDB) - “We want to be the adults that children can speak to” Nthombi Pukwana, clinical psychologist, Transnet Phelophepa train.

The early morning air is cool and nippy, but already queues are quietly forming along a section of railway track in the small town of Darling, a farming community in the west coast region of Western Cape, South Africa, about 75 km (46.6 mi) from Cape Town.

They come from all over the town and its neighbouring communities a class of primary school kids, mothers, teenagers, farmers from the surrounding farms  an eclectic mix.

Nthombi Pukwana, clinical psychologist and acting train manager for the day and weekend was host and guide on the day of our visit. Her passion and belief in the Phelophepa mission is tangible.

This Phelophepa Healthcare train, one of two owned and run by Transnet, is on its last but one stop before services shut down for the year for overhauling and rest and recuperation for the staff. After more than 30 weeks, it’s been a long year. The trains travel from January to October, roughly 35 to 36 weeks each year, visiting a different rural community every fortnight within its four selected provinces.

Pukwana, along with two other trained psychologists and a team of final year students, mostly target preventative interventions to teenagers dealing with such issues as substance abuse, sexuality, anxiety, trauma and bereavement. Career guidance and family counselling are other important areas of focus.

“Teenagers are starting to examine the world around them. They can’t talk to their parents about substance abuse or their curiosity about drugs or sex. We want to be the adults that children can speak to without horror or judgement and be the safe space for them, but also, we are teaching adults how to speak to their children,” said Pukwana.

Promoting mental health awareness is one of the team’s primary objectives a neglected topic for most people. Removing the stereotypes around mental illness and educating on channels for help are critical. “Psychology is not really known. The communities do not have psychologists,” Pukwana says.

Ahead of the train’s arrival in a community, social mobilisers are deployed to spread the word, do the groundwork and to make a needs-assessment. Working with local communities and government departments of health, social services and other partners, the train makes a two-week stop in the selected districts during which they share their services.

“They need to know about us, and they need to expect us,” Pukwana says.

The system thus supplements and supports existing community health facilities and builds relationships with the local healthcare providers. This way, patients can be referred and continue to receive the care they need after the train leaves. This is important for phycological care, she explains.

Pukwana cautions: “Phelephepa is a supporting structure…it’s there to fill the gaps. We are not trying to fix anything. Being able to teach parents and teachers to be able to fill in the role and talk to young children is key. We are trying to create those spaces.”

Achona Vuta, 26, is a registered counselor who initially joined the train as a final year student in 2020 for two weeks. She found the experience so unforgettable that she had to return. It was a time of many firsts her first couple therapy session and first sex education workshop. Dealing with grief and bereavement became her favourite area of discipline, along with equipping teachers to deal with stress management and conflict, rampant in many rural areas and not just the big suburban towns.

The therapists say the experience of crossing the country brings home the universality of mental health challenges in the different communities.

For Vuta, the most important lessons from her time on the train is community.

“I’ve found therapy to be a safe space but also a fun space,” she adds.

The trains make mental health and quality medical care, accessible to South Africa’s most remote communities, where there is often only a single doctor for every 5,000 people.

Quaynor said: “Since 2010, the African Development Bank has invested a total of $500 million in Transnet, towards a portion of its capital expenditure program. The Phelopepa train, while tangential to that, is an example of how investments align with our High 5 priorities such as improving the lives of African people.”

Financing from the African Development Bank has been key to addressing operational challenges for Transnet. This includes boosting its freight capacity from 80 metric tons to 176 metric tons through the acquisition of modern rolling stock. This has improved operational efficiency and is helping position the company as a strategic regional player.

Pukwana says that after three years, she is far from ready to quit the ride.

“It’s been amazing … if you are looking for answers, you will find them,” she says.

The name ‘Phelophepa’ is Sotho and, roughly translated, means ‘good, clean health.’ The Phelophepa Healthcare Trains are the only primary healthcare trains in the world. They are recognised as one of the most innovative designs in primary healthcare in South Africa and globally.

From January 1994 to March 2020, the trains have positively touched the lives of approximately 12.5 million people, dispensed more than half a million pairs of spectacles and provided medication to an
estimated 800 000 people.

Every year, Phelophepa impacts more than 91,000 patients through its on-board clinics, 200 000 individuals through its outreach programs and provides experiential learning placement opportunities to more than 1,100 final year students. This includes students from international institutions of higher education. Since inception, 15,000 community volunteers have participated in a basic healthcare education program, while over 3 million people have participated in HIV/AIDS and first aid training sessions.