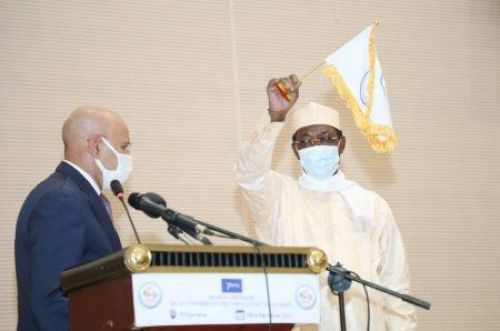 (Ecofin Agency) - Chad will send 1,200 more soldiers to combat Jihadism in the Sahel region. The news was reported on February 15th by President Idriss Deby (pictured, left) during the G5 Sahel summit held in N’Djamena.

This deployment was announced at the Pau summit a year ago. However, the covid-19 pandemic and the need to secure the Lake Chad area prompted N'Djamena to postpone this operation.

In March 2020, Idriss Déby mobilized his defense forces to launch Operation Boma’s Wrath, which neutralized about 1,000 terrorists of the Boko Haram sect in a few weeks, according to the army's assessment.

The new operation is part of the strengthening of military action in an area that has concentrated the bulk of attacks by jihadist groups in the Sahel in recent years. Located between Mali, Niger, and Burkina Faso, the so-called "three borders" zone is considered by the G5 Sahel countries and their international partners as one of the main axes of the fight against terrorism.

"I would like to express our gratitude for the efforts and sacrifices that Chad continues to make for peace and security in the region. In particular, I would like to mention its decision to deploy a second battalion to the joint G5 Sahel force," said Mauritanian President Mohamed Ould Ghazouani while welcoming President Déby's announcement.

As a reminder, since 2013, Chad has been one of the countries most engaged in the fight against terrorism in the Sahel. The military successes achieved in Mali, amongst other countries, against jihadism have enabled the Chadian army to strengthen its reputation among West African public opinion.