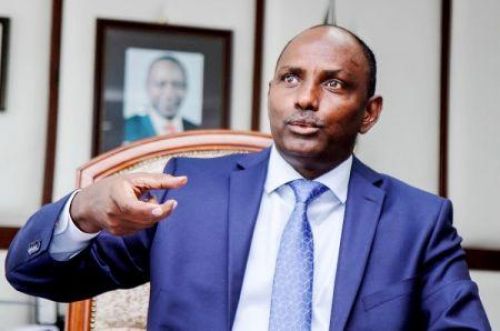 (Ecofin Agency) - Kenya’s budget deficit could rise above the 7.5% initially forecasted for the financial year 2020-21.

According to finance minister Ukur Yatani (pictured), this pessimistic deficit revision is due to an envisaged decline in revenues. The amount cashed by the public treasury over the first two months of FY2020-21 was down KSh40 billion ($368 million) from previsions.

Minister Ukur Yatani says the government is already deploying measures to stop a grim scenario. The government “might be just cutting on some expenditures, particularly the slow-moving projects, and… some state agencies are doing well so we are likely to get some substantial dividends,” he explained, stressing that "in the next two, three weeks, we will have some firm road maps.” Also, an amending Finance Act is expected to be presented to Parliament by January.

This announcement comes in a particular context marked by the Covid-19 pandemic. While the IMF forecast predicted a recession for Kenya this year, the recovery of the flower industry, one of the key sectors of the Kenyan economy, has prompted the authorities to revise upwards their 2020 growth estimates.

The country hopes to receive funding from the World Bank for FY 2021/2022.