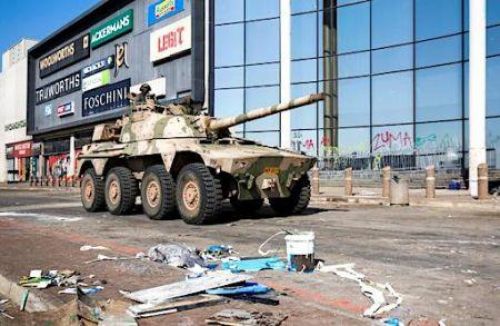 (Ecofin Agency) - Following the imprisonment of Jacob Zuma for contempt of court, riots started in Kwazulu-Natal and chaos spread throughout the country. For President Cyril Ramaphosa, the unrest was planned and organized by a few partially identified individuals.

South African democracy had never been so badly treated since the end of apartheid: a week of looting and violence, 212 deaths and considerable damage. "Free Zuma!” protesters shout.

These disturbances were intentionally provoked, according to the head of state: "There are people who planned and coordinated them (...) We have identified several,” President Ramaphosa said. Several members of the government accuse Jacob Zuma's supporters of inflaming the Zulu community to which the imprisoned former president belongs. According to the police, a dozen people in particular are suspected of organizing the chaos. "We will not allow anyone to destabilize our country and get away with it," the head of state warned.

Cyril Ramaphosa announced the mobilization of 25,000 soldiers to ensure order. But now the authorities fear the health consequences following the riots, during which the Delta variant of the Covid-19 virus has probably circulated at high speed - while the country is already facing a third wave of contaminations, difficult to contain.

But in the emergency, the government must first restore the food distribution channels. Many stores have been looted or have not received supplies for several days. Queues are getting longer in front of supermarkets and the shortage is adding to the difficulties of the population.