America will not dictate Africa’s choices. Neither should anyone else (Antony Blinken) 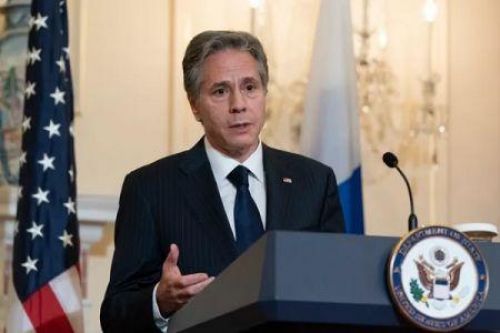 (Ecofin Agency) - The USA wants to warm up its diplomatic and economic relations with Africa to become one of the main partners on the continent. For that purpose, for the first time in the last eight years, it invited African leaders for a US-Africa summit that enabled it to mark its return in the influence of ongoing warfare on the continent.

From December 13 to 15, the United States brought together several African leaders for the second edition of the U.S.-Africa Leaders Summit. During the summit, the USA made billions of dollars of investment pledges and, in the end,  Secretary of State Antony Blinken (photo) reviewed the cooperation between his country and Africa, while recalling Washington's commitments to the continent.

According to the official, the United States wants to offer Africa a credible and non-binding development partnership. African countries must be given the opportunity to choose their partners without being compelled into selecting one side or the other in an era where international alliances seem to be increasingly polarized between the West (EU, USA) and "China-Russia", he indicated.

“America will not dictate Africa’s choices.  Neither should anyone else.  The right to make these choices belongs to Africans and Africans alone,” he said at a press availability last December 15.

“But we will work relentlessly to expand their choices, and the agreements and investments we made this week showed that when African governments, businesses, and communities are offered the choice to partner with the United States, they will take it,” he added.

This benevolent speech contrasts with the attitude of Western countries (the USA included), which often criticizes African countries’ choice to turn to China to fund their development projects. Against a backdrop of rivalry with the Middle Kingdom, Washington has often accused Chinese aid of coming with unfavorable counterparts. China is also accused of locking African recipients into a debt trap or doing business with undemocratic countries that violate human rights.

“Africa’s rare earth are currently battled by the West and China mainly.  The former want to reduce their dependence on the Chinese giant while the latter want to increase their dominance by positioning themselves on more projects. The developing trend suggests that Western firms are currently predominant in the African rare earth sector,” the Ecofin Pro report says.

The United States has significant rare earth reserves but, it appears to be more willing to expand its presence in the African mineral production sector.  Thus, the US-Africa summit was an opportunity for the US authorities to sign a memorandum of understanding with the DRC -which accounted for 70% of the world's cobalt production in 2020 and has more than half of the planet's reserves- and Zambia, to develop a partnership in the production of strategic minerals in the mineral-rich Copperbelt province.

To mark its rebounding in Africa, the United States has announced more than US$55 billion in investments over the next three years. With more than US$15 billion in new deals signed with the private sector and numerous other agreements, the White House has announced its intention to play a more active role in the continent's major projects. Washington is also intent on showing the transparent and "win-win" nature of the partnership it is proposing, unlike the partnerships proposed by "other" countries.

“Too often, international infrastructure and trade deals are opaque.  They’re coercive.  They lead to projects that are environmentally destructive, poorly built, that import or abuse workers, that foster corruption and burden countries with unmanageable debt.  We have a different approach.  We offer investments that are transparent, high-quality, and sustainable for the planet.  We empower local communities.  We respect the rights of their people.  We listen to their people, to their needs,” Antony Blinken says.

Although they insist on their intention to collaborate with African countries without forcing them to pick a side in the increasingly polarized global diplomatic sphere, U.S. authorities also want to curb Russia and China’s influence in Africa. Meanwhile, despite the ambitions stated in previous years, the United States has failed to become a major player on the continent.

For many observers, this "reconquest" operation could be yet another futile attempt to become one of the continent’s main economic partners or a sign that the United States is really determined to gain its ground. All in all, the summit is sure to cause a reaction from Russia and China.

“The reality is that the United States and African nations cannot deliver on any of the fundamental aspirations of our people – we can’t solve any of the big challenges that we face – if we don’t work together.  So our approach is about what America can do with African nations and people, not for them,” Antony Blinken stressed.