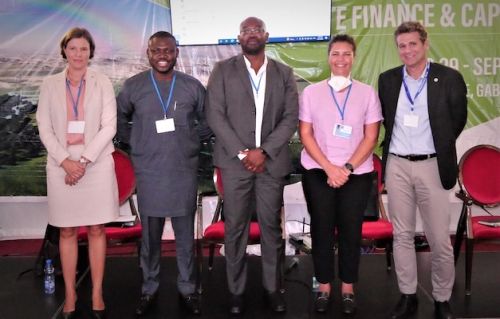 (AfDB) - On the sidelines of the 2022 edition of Africa Climate Week, a session titled Limiting Loss and Damage through Enhanced Adaptation Action in Africa featured vibrant and timely discussion of an aspect of climate change that typically receives little attention: capturing and assessing the costs and damages associated with climate change.

The African Development Bank and Germany’s Konrad Adenauer Foundation hosted the event, which provided a forum for panelists and participants to discuss the importance of defining and evaluating such losses and damages of properties, economies, lives and livelihoods due to climate disasters. Africa is acknowledged to be the continent most vulnerable to climate change.

Moderator Olufunso Somorin, a Regional Principal Officer at the African Development Bank, opened the discussion. He pointed out that it is important for African countries to measure climate-change related loss and damage to enable appropriate quantification and well-designed responses best suited to country context. It was also important to capture those losses occurred even in instances where preventive climate adaptation actions had been taken, he added.

Fatten Agad, Africa Climate Foundation’s Senior Advisor on Climate Diplomacy and Geopolitics, called for production of a report that would serve as guidance and baseline for evaluating climate related losses and damage. “It has already been demonstrated that the socio-economic impact faced by African countries in coping with the Covid-19 crisis has been very high, and adding a burden of financing something such as loss and damage would be unfair,” she said.

Anja Beretta, Konrad Adenauer’s Director for Energy Security and Climate Change in Africa, urged African countries to integrate mechanisms to address losses and damage into their Nationally Determined Contributions (NDCs). She also called for designated institutions and functioning structures to ensure the efficient and effective use of climate finance to advance the discussion on financial flows into loss and damage.

Stephane Bonamy, Head of the Regional Delegation for the International Committee of the Red Cross in Cameroon, said, for countries that face both conflict and climate change impacts, it is imperative that preventive measures are put in place early enough to reduce the extent of loss and damage faced and lessen the burden on communities.” He noted that 14 of the 25 most vulnerable countries to climate change impacts worldwide also face some form of conflict.

Dr Olumide Abimbola, the Executive Director of the Africa Policy Research Institute in Berlin reiterated the need for more African examples of past and current loss and damage to be incorporated into textbooks and journals.

There was agreement among the participants on the need for Africa to prioritize timely, comprehensive and large-scale adaptation action to avert or minimize future losses and damages.

There was also consensus on the urgent need to scale up financial flows from public and private sources into adaptation action across Africa. They cited the African Development Bank’s Africa Adaptation Acceleration Program, a joint initiative with the Global Center on Adaptation, as a positive example. The program seeks to mobilize $25 billion over five years to accelerate and scale climate adaptation actions across the continent.

Participants also called for new strategic partnerships to drive adaptation policies, plans and investments in Africa through the implementation of NDCs and tapping synergies with such initiatives as the Africa Disaster Risk Financing program.

About the African Climate Week (ACW)

ACW is an annual event that engages and empowers stakeholders to drive climate action across countries, communities and economies. The event is organized by UN Climate Change in collaboration with global partners UN Development Programme, UN Environment Programme and the World Bank Group. Partners in the region include the Africa Union, the Africa Development Bank, the UN Economic Commission for Africa (UNECA). ACW 2022 was hosted in Gabon.