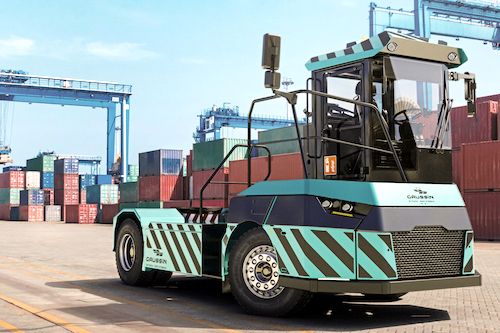 ( BOLLORE ) - As part of the project on the second container terminal in the Port of Abidjan, Côte d’Ivoire Terminal is announcing the order of 36 electric towing vehicles from the manufacturer Gaussin. The new handling machines will equip the future container terminal, construction work on which was launched in October 2020 by Côte d’Ivoire Terminal.

The order, for a total of €9.9 million (6.5 billion CFA francs), is one of the commitments made by the leading shareholders of Côte d’Ivoire Terminal, Bolloré Ports and APM Terminals as part of the public-private partnership signed with the Côte d’Ivoire authorities. It is notably part of the objective to make the new port a pioneer in eco-responsibility.

The electric towing vehicles, to be delivered in late 2021, are 100% electric and emit no CO2 emissions or noise pollution. They serve to reduce the cost of energy consumed at terminals by 70%. Powered by LMP® batteries by Blue Solutions, the new handling machines offer top-level reliability, range and safety.

A result of the synergies between Bolloré Ports, Blue Solutions and Gaussin, the electric towing vehicles will reduce the environmental footprint of the future container terminal. Côte d’Ivoire Terminal plans to promote eco-responsible logistics solutions on the West African coast that are more respectful of people and their environment and which contribute to the Green Terminal certification programme.

“This electric equipment, combined with the efforts to protect biodiversity, will shrink the carbon footprint of our business activities. This is a priority for us. The aim of Côte d’Ivoire Terminal is to innovate and accelerate its energy transition with the support of the Autonomous Port of Abidjan. The success of the initial electric towing vehicles rolled out by Gaussin at other port terminals in Africa bears out the relevance of our choice,” said Koen De Backker, Managing Director of Côte d’Ivoire Terminal.

Following an international call for bids, the Bolloré Ports and APM Terminals consortium won the contract on the construction and management of the second container terminal in the Port of Abidjan. Through an investment of over 262 billion CFA francs, work on the construction of the future Côte d’Ivoire Terminal will be completed in 2022. With a surface area of 37.5 hectares, the new container terminal will be able to process over 1.5 million TEU containers a year and welcome ships with a draught of 16 metres on 1,100 metres of wharves. The terminal will generate 450 direct jobs and thousands of indirect jobs. It will contribute to the upskilling and training of young Ivorians in the port professions and the handling of latest-generation equipment.