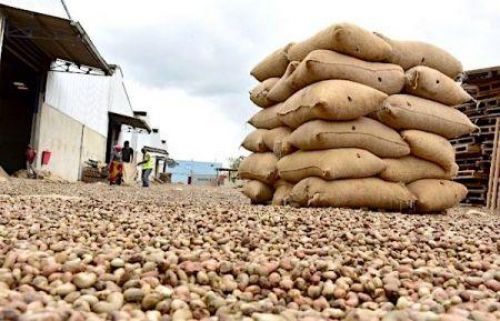 (Ecofin Agency) - Speaking at a press briefing in Abidjan on the 2019 cashew marketing year, Gustave Kotchi, spokesman for the Group of Agricultural Exporters and Professionals (GIE-GEPPA), said Côte d’Ivoire sold its entire production during the campaign.

“Prices, which were at their lowest level, immediately started to rise again with the sale of all national production,” he said. He explained that sector players were not expecting to sell the entire production since international tariffs dropped causing a drastic decline in prices. For the period reviewed, the minimum farm gate price was 375 CFA francs/kg of well-sorted, clean and well-dried nuts. And Côte d'Ivoire forecasted production of 800,000 tons compared to 761,000 tons the previous year.

This year, the sector wants to process 130,000 tons of nuts, compared with a current capacity of around 122,000 tons. To reach its target, the Cashew Cotton Council is currently building a school factory in Yamoussoukro.