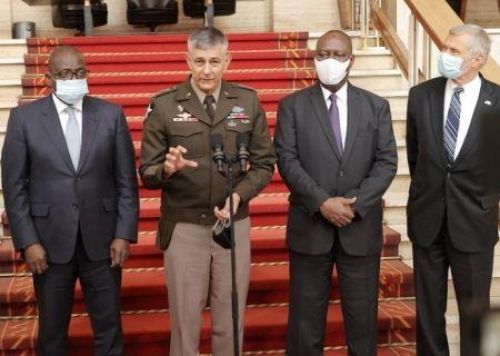 (Ecofin Agency) - West Africa has become in recent years a playground for terrorist activity. Several Islamist organizations are active in the region, and their influence is growing over the years. The region has received support from various partners but the challenges remain.

General Stephen Townsend, who heads the US Africa Command (AFRICOM) announced the command is currently exploring ways to improve and maintain security in West Africa. He said this while on a visit to Ghana and Côte d'Ivoire on September 20-21.

With government and military authorities in these two countries, General Townsend discussed cross-border cooperation and security stabilization. “I was able to meet with senior African leaders to talk about the importance of continuing our regional approach to addressing security issues and how we at U.S. Africa Command can help,” he said.

Côte d'Ivoire recorded its first terrorist attack in 2016 in Grand-Bassam, followed by another four years later in 2020, before suffering four jihadist attacks in two months in 2021. In partnership with Burkina Faso, Ivorian security forces are conducting joint operations to track down Islamist groups.

Let’s note that countries within the West African Economic and Monetary Union (WAEMU) have gathered a $100 million security fund to handle terrorism.