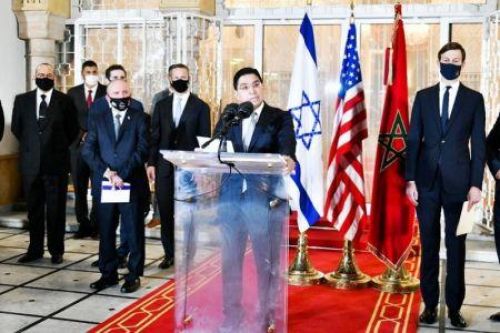 (Ecofin Agency) - Israel and Morocco continue the process of warming their relations, which officially started a few days ago. On Tuesday, December 22, they signed an agreement to quickly establish "full" diplomatic relations.
According to the declaration, the two countries agreed to "resume without delay full official contacts and to establish full, peaceful and friendly diplomatic relations.”

The document lays the foundation for better cooperation between the two countries. It encompasses several sectors such as trade, finance and investment, innovation and technology, civil aviation, visas and consular services, tourism, water, agriculture, and food security among others.

The statement comes as the two countries inaugurated their first direct commercial flight on December 22, with Jared Kushner, advisor to U.S. President Donald Trump, on board.

His arrival in Rabat with the Israeli National Security Advisor, Meir Ben-Shabbat, underlines the important role played by the U.S. in this diplomatic rapprochement which also involved the recognition by Washington of Moroccan sovereignty over the disputed territory of Western Sahara.

"The United States will encourage economic and social development with Morocco, including in the territory of Western Sahara," said the new tripartite declaration. To this end, the United States will open a consulate in the territory of Western Sahara, in Dakhla, to promote economic and commercial opportunities for the region," the document revealed.