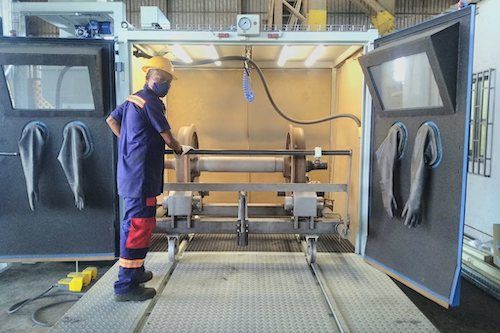 ( BOLLORE) - Sitarail, the operator of the railway between Côte d’Ivoire and Burkina Faso, has since 2019 rolled out a large-scale programme of investments to modernise its maintenance workshops in order to improve the quality of rail traffic.

In 2019-2020, the company invested over two billion CFA francs in the acquisition of modern equipment for its locomotive and wagon maintenance workshops in Abidjan and Bobo Dioulasso.

The acquisitions include a Demoor tower, a pit tower, a Berthiez vertical tower, three Lincoln loaders, an Alpha Laval centrifuge, a shot-blasting machine, a folding press, and a press for wheel assembly and disassembly. The company has also acquired three new travelling cranes currently being installed at the workshops.

This new equipment has already served to boost the efficiency and reliability of maintenance operations. It makes the work of rail workers less arduous and ensures the safety of rail traffic in the Côte d’Ivoire-Burkina Faso network.

Through these investments, Sitarail has reinforced its strategic role in trade between Côte d’Ivoire and Burkina Faso, as rail remains one of the main goods transport modes between the two countries, with a record one million tonnes of freight in 2020.

“The modernisation of our operational tools is an integral part of our strategic vision aimed at equipping Sitarail with leading-edge equipment to better respond to our customers’ expectations. We aim to continue these investments with a view to providing our employees with high-performance tools to boost trade between Côte d’Ivoire and Burkina Faso,” said Quentin Gérard, General Manager of Sitarail.

Société Internationale de Transport Africain par Rail (Sitarail), a Bolloré Transport & Logistics subsidiary, operates the railways in Côte d'Ivoire and Burkina Faso. It is headquartered in Abidjan, Côte d’Ivoire, and has a national representation office in Burkina Faso. The company is the concessionary of the operation of the Abidjan-Ouagadougou rail network, the construction of which began in Abidjan in 1904 and was completed in Ouagadougou in 1954. A flagship of rail transport in West Africa, Sitarail transports an average 200,000 passengers and 900,000 tonnes of freight a year. It employs 1,500 people on average and, through its initiatives in healthcare, education and the environment, stands as a key driver of social and economic development and regional integration in West Africa.