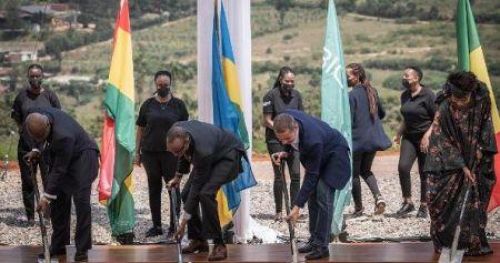 (Ecofin Agency) - In Africa, there is a growing number of initiatives to boost the local medicine production capabilities. In the same wake, leaders and international partners want to increase the number of vaccine factories on the continent.

Covering 30,000 square meters, the facility will initially be equipped with two BioNTainers, scheduled for completion by the end of 2022. It will employ nearly 100 people in the next two years.

According to the release, the BioNTainers will specialize in the production  of "a range of mRNA-based vaccines targeted to the needs of the African Union member states, which could conceivably include the Pfizer-BioNTech COVID-19 vaccine and BioNTech's investigational malaria and tuberculosis vaccines, if they are successfully developed, approved or authorized by regulatory authorities.” They will produce approximately 50 million doses of Pfizer-BioNTech covid-19 vaccine per year and may also quick off the human stage of the malaria vaccine trial this year.

"The company expects to set up additional factories in Senegal and South Africa in close coordination with its partners in the respective countries. The initial site will become a node in a decentralized and robust African end-to-end manufacturing network. All vaccines to be manufactured in the network will be dedicated to people residing in member states of the African Union," the release adds.

The German pharmaceutical company first announced an agreement with Rwanda and Senegal to build vaccine production plants last October 2021. It aims to create a continental network that will enable the production of millions of vaccines every year.

This initiative comes at a time when African authorities are planning to strengthen the local production of pharmaceutical products. Currently, the continent manufactures about 1% of the vaccines it uses and the Africa Union wants to increase that percentage to 60% by 2040.