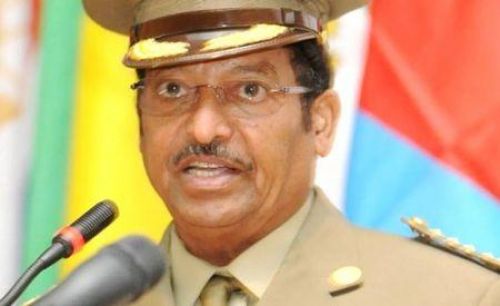 General Filipos Woldeyohannes (pictured), “is designated pursuant to Executive Order 13818, which builds upon and implements the Global Magnitsky Human Rights Accountability Act and targets perpetrators of serious human rights abuse and corruption around the world,” the statement reads.

This means that the head of the Eritrean army is banned from entering the United States and his assets on American territory are frozen. This sanction comes at a time when Filipos Woldeyohannes is accused, with his army, of having committed serious human rights violations during the ongoing conflict in Ethiopia.

“Under Filipos’ command, EDF troops have raped, tortured, and executed civilians in Ethiopia.  Internally Displaced Persons (IDPs) have described a systematic effort by the EDF to inflict as much harm on the ethnic Tigrayan population as possible in the areas the EDF controls.  Eritrean troops have forcibly displaced civilians and ransacked businesses; IDPs spoke of a “scorched earth” policy intended to prevent civilians from returning home.”

Washington asked the government of Eritrea to withdraw its soldiers from Ethiopia "immediately" and "permanently. “We call on the UN Security Council and wider international community to come together to push for a peaceful resolution of this ongoing conflict,” the statement said.

Several reports, including one by Human Rights Watch (HRW), accuse the Eritrean military fighting alongside the federal army against the Tigray People's Liberation Front (TPLF) of committing abuses and killing hundreds of civilians. According to the UN's acting Under-Secretary-General for Humanitarian Affairs, Ramesh Rajasingham, the famine in the region is affecting more than 400,000 people, including 33,000 children who are acutely malnourished; 1.8 million additional people are reportedly at risk of food insecurity.

The United States has also announced that it will put pressure on international financial institutions to freeze funding for Ethiopia. This would be a major blow to the Ethiopian economy, which is struggling to recover from the conflict.