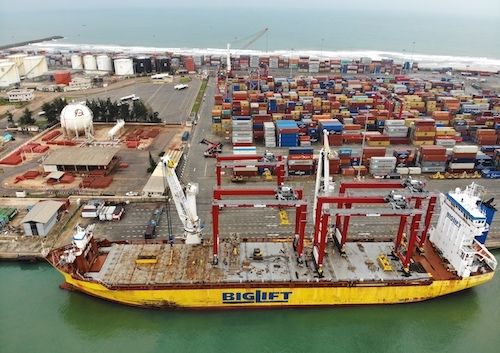 (BOLLORE) - Benin Terminal, the operator of the Port de Cotonou container terminal, took delivery of two new gantries on 20 September 2020. The new equipment will serve to improve the productivity of Benin Terminal, boost the country’s competitiveness and bolster trade in West Africa.

With a lifting capacity of 40 tonnes each, the ultra-modern gantries will improve container storage capacity at the terminal, increase the pace of deliveries and reduce handling times for goods at Benin Terminal.

Financed by Benin Terminal to the tune of 2.1 billion CFA francs (€3.2 million), the two yard gantries, built by lifting equipment manufacturer Konecranes, will strengthen the stevedoring capacities of the Benin Terminal container terminal.

“Despite the COVID-19 pandemic, Benin Terminal is pursuing its programme of investments and continues to modernise its port activities at the Autonomous Port of Cotonou. We now have 12 yard gantries. The new equipment will make our stevedoring operations even more seamless and improve service quality for our shipping company and consignee customers,” said Yann Magarian, Managing Director of Benin Terminal.

Thanks to the 95 billion CFA francs (€145 million) invested by Benin Terminal since 2013, the container terminal has become a regional logistics hub for growth for Niger, Mali, Burkina Faso and Nigeria. The investments have made Cotonou a more efficient, modern and attractive port that contributes to the economic development of Benin.

Benin Terminal, which today employs some 677 Beninese nationals, is thus contributing to the fluidity of the supply chain in Benin and the countries in the sub-region. In addition to its port activities, the company also rolls out solidarity initiatives every year in key sectors such as health, education and environmental protection.

Benin Terminal is the operator of the container terminal of the Port of Cotonou. A key player in the country's supply chain, Benin Terminal employs 677 Beninese nationals and leads a subcontracting policy serving to generate 1,000 indirect jobs. Benin Terminal also implements initiatives for local populations in partnership with NGOs. For example, it assists young people suffering from HIV in their education, supports the empowerment of young people and raises awareness of environmental protection.