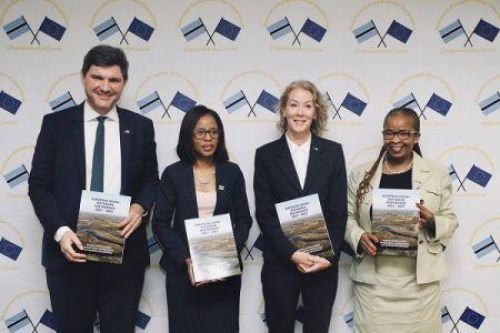 (Ecofin Agency) - Botswana, which depends on mineral exploitation, wants to diversify its economy to accelerate its development. In that bid, it is counting on partners. With the EU particularly, it has a new cooperation agreement that will run until 2027.

Last Tuesday, Botswana launched its Multi-Annual Indicative Program (MIP) 2021-2027, in collaboration with the European Union (EU). The program, which sets the framework for cooperation between the two partners over the agreed period, will mainly focus on green transformation and economic diversification.

According to the European Union, the goal is to help the southern African country meet employment challenges by diversifying its economy while focusing on sustainable development and becoming less focused on the exploitation of natural resources.

“Botswana has enormous potential for renewable energy, in particular by developing solar energy. It has enormous potential if it invests in its youth to make them the driving force behind the diversification and development of the economy, and the country,” said Petra Pereyra, the European Union’s ambassador to Botswana.

With an economy primarily driven by the mining sector (diamonds account for over 80% of its exports), Botswana is considered an upper-middle-income country and aims to become a high-income country by 2036. However, the country faces significant inequalities, particularly in youth employment.

"Inequality in Botswana remains among the highest in the world. Job creation lags and unemployment is structurally high at 26% at the end of 2021. […] Structural reforms, needed to boost competitiveness for more and better jobs, remain essential to tackling the unemployment rate of 26%," the World Bank says.

Let’s note that under the Multi-Annual Indicative Program, Botswana will receive US$16.6 million of financial support over 2021-2024. Additional financial support will be determined after a program review in 2024.