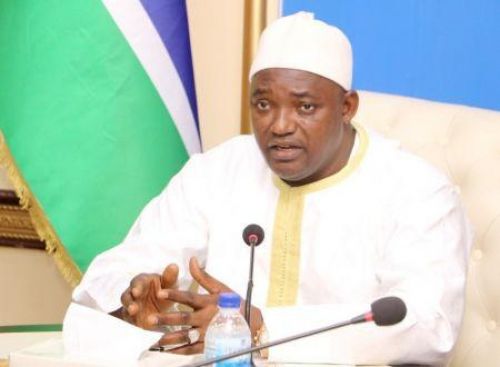 (Ecofin Agency) - Gambian government kicked off last April its Operation Zero Crime to handle the rising criminality in the country. The strategy has helped arrest many suspects but more effort is needed.

During a Tv address yesterday May 24, President Adama Barrow (pictured) announced he has put the national army on alert to assist the police in dealing with the growing crime problem in the country. He says he wants to put an end to the series of criminal acts that have been observed in the country since 2017. As he said, some individuals "take advantage of the prevailing free and democratic environment" since 2017 to perpetrate crimes including assaults and robberies. These acts are reinforced by the circulation and illegal possession of weapons and sometimes end tragically in death.

To put an end to the abuses, Adama Barrow announced that the army would be called on to protect people and property. In addition, the police will be provided with training and equipment to strengthen their capacity to fight crime.

As a reminder, Gambia launched, in April, a police operation called "Operation Zero Crime" to identify and dismantle all the hotbeds of organized and unorganized crime. However, the operation, which led to the arrest of 881 suspected criminals in two months, failed to quell public protests.

The president's decision comes amid protests against the current government, as a commission prepares to reveal the results of an investigation into abuses committed by former head of state Yahya Jammeh during his 22 years in power.