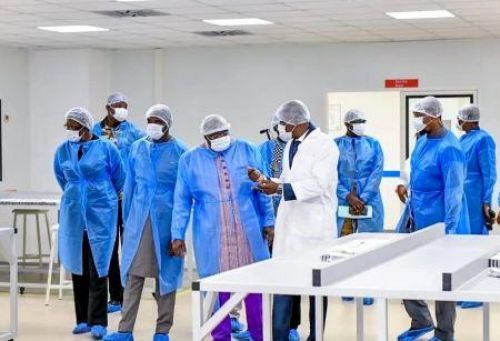 (Ecofin Agency) - African countries import 97% of the pharmaceutical products they use. In recent years, several projects have been launched to increase the percentage of locally-produced drugs in their consumption.

The plant is the result of a private initiative by Burkinabe pharmacists led by Dr. Palingwindé Armel Koéfé, director general of Propham. The US$23 million plant aims to boost the country’s self-sufficiency in medicine production.  In the short term, it will produce three types of generic drugs, including paracetamol (largely used in the West African region). However, the list of drugs to be produced by the plant may get longer in the long term.

"This is an important plant that will help provide our people with lower-cost medicines and ensure their permanent availability as the products manufactured here are the most sought-after in health facilities," said Albert Ouédraogo, Burkinabe Prime Minister, who presided over the inauguration.

Like many African countries, Burkina Faso is not yet self-sufficient in vaccine and drug production. The situation forces it to import most of the pharmaceutical products it uses and even exposes the country to the plague of counterfeit drugs. According to a joint report published in 2021 by the French Development Agency (AFD) and the United Nations Economic Commission for Africa (UNECA), Africa imports 97% of its pharmaceutical products.

The Center for Global Development also indicates that generic drugs are up to 30 times more expensive in countries like Zambia, Senegal, and Tunisia compared to developed nations like the United Kingdom or the United States. This situation facilitates the spread of cheaper but counterfeit medicines on the continent.

In recent years, some public and private initiatives such as the Propham plant have been launched to reduce African countries’ dependence on imported pharmaceutical products.  In 2020, for example, at the height of covid-19, Madagascar inaugurated a pharmaceutical factory producing medicines, remedies, and food supplements based on traditional Malagasy medicine.

Apart from those national initiatives, a continental initiative, the African Medicines Agency (AMA), has been established to facilitate "patient access to medicines" by increasing "access to new, effective, safe and quality medicines through harmonization of regulatory requirements resulting in faster and simpler review processes.” Doing so, it hopes to contribute to  "an uninterrupted supply of quality medicines through predictable and transparent life-cycle management procedures" and avoid "patient exposure to substandard and falsified medicines through increased cross-border market surveillance and coordinated information sharing.”