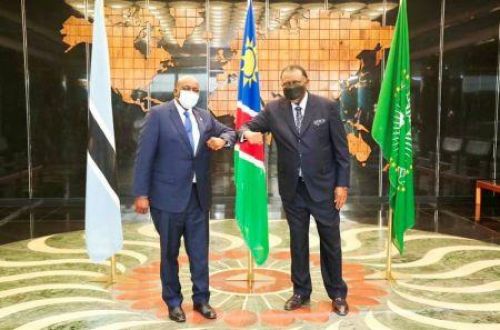 (Ecofin Agency) - Namibia is setting up a common plan with Botswana to find a solution to the water scarcity issue they are both facing. The information was reported yesterday by Botswana’s President Mokgweetsi Masisi on Twitter, following a meeting with his Namibian counterpart Hage Geingob.

The meeting saw the two Presidents discuss the water challenges their population face and the ways to solve the problem through a joint plan. Both countries suffer a severe water scarcity, partly because of their geographical position (being landlocked), and also because of the gradual drying up of the various water points that used to meet their needs. The low rainfall experienced by the two countries in recent years has led to a drop in the filling level of dams, such as Gaborone and Nnywane in Botswana.

The Namibian government wants to establish a plan to supply water from the Atlantic Ocean. To do so, the government is mulling over a desalination strategy to help redistribute drinking water.

Botswana's President Mokgweetsi Masisi says the prospects are fine by him but he needs to figure out with his collaborators the best move possible per his country’s governance procedures.