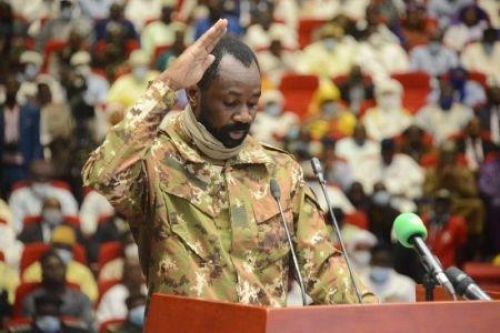 (Ecofin Agency) - Following the new coup that led to the arrest of President Bah N'Daw and transitional Prime Minister Moctar Ouane, the military junta addressed the population. In a television statement, Colonel Assimi Goïta (pictured), vice president of the Transitional Council and head of the Malian junta, said he was "obliged to act to preserve the charter of the Transition.”

The military leader says this new power grab is due to the recent events that led to the resignation of the first government and the Prime Minister and then to the reappointment of the latter by the President. After numerous discussions with the country's main forces following protests, Moctar Ouane was charged with forming a "broad-based" government, taking into account all of Mali's political sensibilities.

"In the process of forming a new government, the newly reappointed Prime Minister drew up a list of governments in agreement with the President of the Transition, without consultation with the Vice President in charge of the prerogatives conferred on him by the Charter, namely: Defense and Security," said Assimi Goïta.

"Such a move shows a clear desire of the President of the Transition, and the Prime Minister, to move towards a violation of the Charter contrary to the oath taken at his inauguration on September 25, 2020," he added.

According to the statement, Colonel Goïta tried to negotiate with the President and the Prime Minister to settle the dispute, but "they stuck to their stance. “The vice president of the Transition was obliged to act to preserve the charter and defend the Republic by placing the president and his prime minister, as well as all those involved in the situation, outside their prerogatives,” the statement said

For some observers, one of the main reasons for the arrest of N'daw and Ouane is the removal of two military officers from the list of the new government. According to local sources, these are people close to Assimi Goïta, who were in charge of the Ministry of Security and the Ministry of Defense. They were replaced by two army generals, triggering the discontent of the junta.

This new coup in Mali raises fears of an escalation in the security crisis that the country has been experiencing for decades. Since the jihadist insurgency in the north in 2012, the Malian territory has been the scene of repeated attacks by terrorist groups against civilians and the military forces. The military removed former President Ibrahim Boubacar Kéïta from office in August 2020, blaming him for his poor management of the security crisis, at a time when the head of state was already strongly contested by the street.

After long political negotiations finally led to the appointment of Bah N'Daw, a civilian (but former military) as president, hopes for relative political stability began to emerge, despite the persistent demands of political parties and civil society members to be more involved in the transition process. In April, an electoral schedule was announced with presidential and legislative elections set for February 27, 2022, and a constitutional referendum scheduled for October 31 of this year.

With this new political crisis looming, many observers fear that jihadist groups will take advantage of the country's political instability to increase their activities.

Assimi Goïta sought to reassure the nation of the military junta's intention to return power to civilians. "The vice-president wishes to make it clear that the transition process is following its normal course, and that the planned elections will be held in 2022," the statement said. An ECOWAS delegation led by former Nigerian President Goodluck Jonathan is expected to visit the country to find a solution to the crisis.