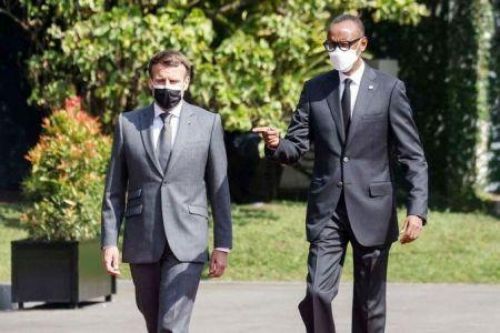 (Ecofin Agency) - In his visit to Rwanda today May 27, French President Emmanuel Macron delivered a long-awaited speech on France’s role in the Rwandan genocide. He looked back on the awful events that took place from April 7 to July 15, 1994, and once again condemned the passivity of his country.

Macron acknowledged France’s responsibilities in the massacres that took the lives of 800,000 Tutsis. “The killers who haunted the swamps, the hills, the churches did not have the face of France. France was not an accomplice [...] But France had a role, a history, and a political responsibility in Rwanda. It has to look history in the face, and recognize the suffering it has inflicted on the Rwandan people by allowing silence to prevail for too long over the examination of the truth," he said. "By ignoring the warnings of the most lucid observers, France assumed a damning responsibility in a spiral that led to the worst. By standing with humility and respect at your side, today I acknowledge our responsibilities," he admitted.

Some associations of victims have regretted that Emmanuel Macron did not officially apologize, but the Rwandan President, Paul Kagame, says he has welcomed the “strength” of his French counterpart’s speech.

“Today is a moment to speak to the President and the future while reflecting on the past that brought us here […] This was a powerful speech with a special meaning for what is taking place now and which will resonate well beyond Rwanda. His words were something more valuable than an apology,” Kagame said, stressing that “they were the truth.”

According to Paul Kagame, Emmanuel Macron has shown courage by coming to Kigali to admit the role of France in the genocide, and this step should allow the two countries to write a new page in their history.

“Speaking the truth is risky but you do it because it is right. Even when it costs you something, even when it is unpopular. Despite some loud noises and voices, President Macron took this step.

Politically and morally, this was an act of tremendous courage. These risks paid off because there was good faith on both sides. It was important not to rush the process. The facts had to be properly established,” he said.

These statements confirm the new impetus given to Franco-Rwandan relations since Emmanuel Macron came to power. Apart from Rwanda, the head of state has also initiated a reconciliation process with Algeria, another African country with which he has a more or less difficult relationship.

“President Macron is among those who realize that things need to change, and he is taking a strong stance in trying to bring about that change,” said Paul Kagame, full of praise for his counterpart.

As part of the visit, the two countries also signed new agreements to strengthen their cooperation in several areas. This is in line with the revitalization of political but also economic Franco-Rwandan cooperation, which has taken a new turn since the return of the French Development Agency (AFD) to the country in June 2020, after nearly three decades of absence. According to Emmanuel Macron, in less than two years, the institution has already granted more than €130 million in financial aid to Rwanda to support projects ranging from rural electrification to training. In total, the French leader said that €500 million will be granted to Kigali over the period 2019-2023, in the health, digital, and Francophonie fields.

Let’s note that the French head of state also announced that an ambassador would soon be appointed to Rwanda, after 6 years of absence. "The position remains vacant and the normalization of our relationship could not be envisaged without this step," he said.