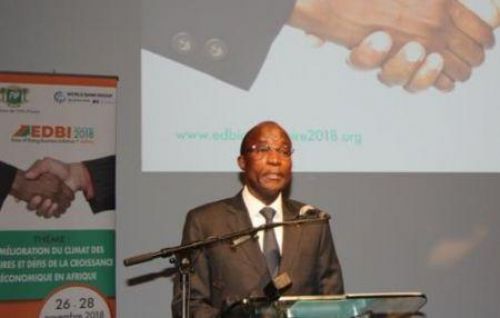 (Ecofin Agency) - More than half of the taxes paid in Côte d’Ivoire were done online by end June 2018, Adama Koné (photo) the minister of finance revealed during the launch of the 9th yearly conference on Ease of Doing Business Initiative (EDBI). This equals XOF553 billion (about $950 million) if we consider the XOF1,106.1 billion (about $1.9 billion) collected by the country during H1, 2018.

For Adama Koné, this performance is the result of new reforms initiated by the government in recent years. He indicated that these reforms contributed to the implementation of the online tax declaration and payment system called E-Impôt helping Côte d'Ivoire become the first French-speaking country to introduce this system in West Africa.

The minister also revealed that in the implementation of the structural transformation process of the Ivorian economy via industrialization, in 2015, the government adopted reforms aimed at improving the business environment, dematerialization of administrative procedures, tax optimization, increase of transparency and efficiency of public services notably. All those reforms helped the country improve its ranking in Doing Business 2019 published by World Bank, going from the 139th  place to the 122nd.  In this year’s edition of the Doing Business report, it is also in the Top 10 of the most reforming countries in the world.