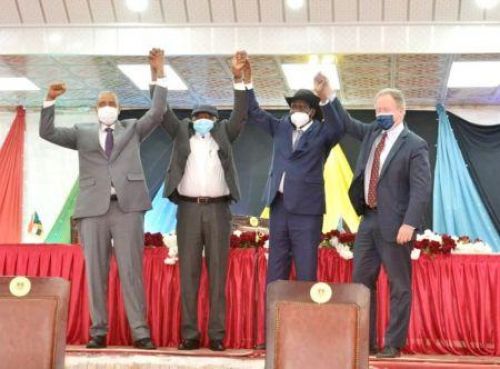 (Ecofin Agency) - In Sudan, the transitional government has initiated negotiations with the rebel faction of the Sudan People's Liberation Movement-North (SPLM-N), led by Abdelaziz al-Hilu. This was reported by the Sudan News Agency (SUNA), citing official sources.

According to the media, the two parties agreed on Sunday, March 28, 2021, to relaunch peace talks. In that regard, a declaration of principles was signed in Juba (South Sudan) between General Abdel-Fattah al-Burhan, Chairman of the Sudanese Sovereign Transitional council, and Commander Abdelaziz al-Hilu, who has been leading (since 2017) a faction of the SPLM-N, while the other is being led by Malik Agar. The agreement aims to ensure the comprehensive resolution of the Sudan conflict.

This announcement comes nearly five months after a historic peace agreement was signed by the Government of Sudan and several rebel groups to end 17 years of war. The rebel faction led by Abdelaziz al-Hilu (the largest rebel group in the country), which controls large areas in the country, participated in the negotiations. But, unlike Malik Agar's faction, it decided not to sign the peace agreement.

During the new negotiations,  Al-Hilu's faction emphasized the creation of a secular state and a reformed army. To this end, the declaration of principles signed in Juba emphasizes "the establishment of a civil, democratic, and federal state in Sudan, wherein, the freedom of religion, the freedom of belief and religious practices and worship shall be guaranteed to all Sudanese people by separating the identities of culture, region, ethnicity and religion from the state."

"No religion shall be imposed on anyone and the State shall not adopt any official religion," it continued reminding that "Sudan shall have a single professional national army that operates according to a new unified military doctrine that is committed to protecting national security per the constitution."

In a Tweet on his official page, Prime Minister Abdalla Hamdok qualified the signature as "a courageous gesture" and proof of Sudanese’s (both civilians and military) will to complete the second phase of the peace process initiated after the Juba and Addis Ababa agreements.

Let’s note that since the fall of the dictator Omar al-Bashir, the transitional government led by Prime Minister Abdalla Hamdok has been trying to put the national economy of Sudan back on track, in preparation for the upcoming general elections. The authorities also made pacification one of the necessary conditions for economic recovery.