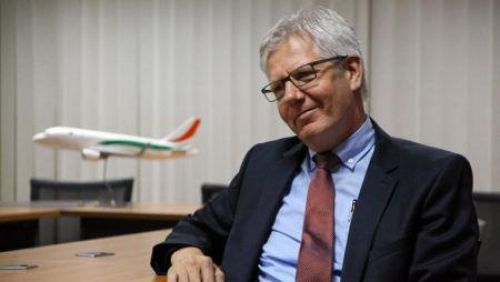 (Ecofin Agency) - The Ivorian government announced the disbursement of $24 million to support the national carrier -Air Côte d'Ivoire- which has been running a deficit since 2012 when it started operations. In an interview with Reuters on June 26, the company’s MD, René Decurey (pictured), said the government support will help keep the company afloat and mitigate the impact of the pandemic.

Air Côte d'Ivoire has suspended operations since mid-March this year in line with the measures taken by governments all over the world to control the propagation of the coronavirus. The situation has worsened the company’s already fragile financial state. In 2017, the Ivorian airline reported a five-year cumulative loss of CFA65.5 billion (about $112 million).

Three months after it suspended its operations, the company announced it has resumed domestic flights on June 26 and is expecting international lines to reopen on July 1st. “If everything goes well, the airline hopes to recover 80% of its passengers by the end of 2020, if it resumes regional services in Jul-2020,” explained René Decurey.

As part of the densification of its fleet, Air Côte d'Ivoire, which carried more than 750,000 passengers last year, was expecting the delivery of the first two Airbus A319neo and A320neo aircraft from the second quarter of 2020. According to René Decurey, the A320neo will be delivered next October, bringing the fleet to eleven aircraft. Currently, the airline operates four A319ceo, two A320ceo, and four Dash8-400s.