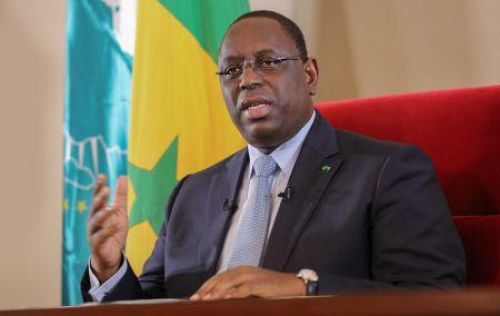 (Ecofin Agency) - In the last few months, Senegal has faced political tensions, which caused tense legislative elections and brawls at the parliament. The amnesty touted by the President aims to promote peace for appeased Presidential elections.

In Senegal, President Macky Sall (photo), has instructed Minister of Justice Ismaila Madior Fall, to implement an amnesty program that would allow his political opponents who lost their voting rights to regain their eligibility. The information was disclosed by local media earlier today.

The decision comes less than two years before the 2024 presidential elections. It mainly targets the former mayor of Dakar, Khalifa Sall, and Karim Wade,  son of former president Abdoulaye Wade. The two individuals were convicted in 2018 and 2015 respectively.

This announcement aims to "ease political tensions which have heated up in recent months, culminating in a tense legislative election and scuffles in parliament.”

According to some local media outlets, Karim Wade’s party, the Senegalese Democratic Party has already rejected the amnesty saying it is for those guilty of something while this is not the case for Karim Wade. Quoting the party’s spokesperson, a media announces that the political party “firmly” rejects that decision.

Khalifa Sall and Karim Wade are seen as President Macky Sall’s most serious political rivals. In recent months, however,  a third political figure has emerged, Ousmane Sonko namely. He successfully led large demonstrations against the ruling party, which lost its parliamentary majority.