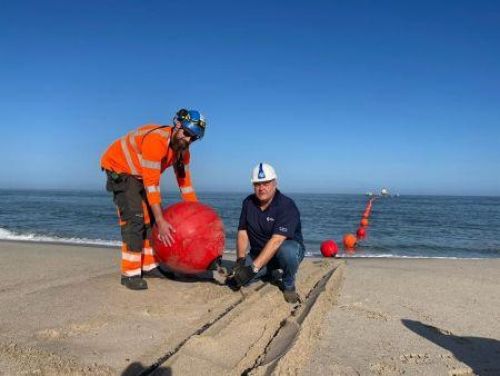 (Ecofin Agency) - Over the past two years, demand for broadband connectivity and data traffic has exploded in Africa, mainly due to the coronavirus pandemic. To meet that demand and keep up with accelerating digital transformation, Namibia wants to strengthen its broadband infrastructure.

Equiano, Google’s subsea cable, has landed in Swakopmund, Namibia. This was announced by pan-African broadband connectivity provider Paratus Group and state-owned mobile operator Telecom Namibia, which built the cable landing station (CLS). When fully operational in the fourth quarter of 2022, the new infrastructure is expected to significantly improve the quality of Internet connectivity in the country.

According to Barney Harmse (phot, right), president and CEO of Paratus Group, the arrival of the Equiano cable will strengthen the West Africa Cable System (WACS) and significantly increase Namibia's international bandwidth capacity. "This will not only ensure better stability of connectivity in the country but also lower latency and higher speeds in global transmission of data," he added.

Google announced the deployment of its subsea cable system to connect Europe to Africa in 2019, with the first phase expected to be completed in 2021.  In February 2021, Paratus, Telecom Namibia, and tech service provider Demshi Investment Holdings agreed to fund Namibia’s connection to the subsea cable. Subsequently, in January 2022, the landing station was completed and equipped.

Equiano's landing in Namibia comes some three months after the subsea cable landed in Togo, its first African destination.  A month later, Nigeria welcomed the cable.

The subsea cable project is part of Google’s commitment to investing US$1 billion in Africa over five years to support digital transformation. For Namibia, the connection to Equiano is in line with the country’s long-term development plan "Vision 2030," which positions ICT as a key pillar for economic development.

According to a study commissioned by Google in the framework of the Equiano project, Namibia’s connection to Equiano will increase internet speed by 2.5 folds and internet penetration by 7.5 percent over the next three years in the country. It will also significantly improve job creation, growth, and sustainability.

Between 2022 and 2025, Equiano is expected to indirectly create 21,000 jobs in Namibia through the expansion of the digital economy and related business sectors.