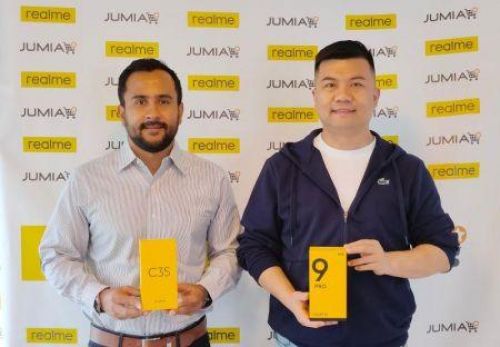 Jumia recently signed a partnership agreement with Chinese smartphone brand Realme to introduce cutting-edge devices in the Sub-Saharan African market. The move is aimed at accelerating smartphone adoption in the region. According to Jumia’s Vice President for consumer electronics Sandeel Narayanan, the partnership will “provide Jumia's consumers with access to best-in-class, affordable smartphones via Jumia’s seamless shopping experience.”

Under the agreement, Realme will have an official store on the Jumia platform, connecting with the online consumers in the 11 Jumia’s African markets. It will start with Nigeria, then add Kenya, Ghana, Côte d’Ivoire, and the remaining African markets.

Commenting on the partnership, Jack Zhang (photo, right), Realme's general manager for the MEA region (the Middle East and Africa) said:  "This partnership reflects our ongoing commitment to technology decentralization by making technology that used to be only in flagship models to be accessible to more consumers.” The partnership is also expected to accelerate e-Commerce adoption in Africa.

As early as 2020, Jumia was already stating its willingness to partner with more Chinese companies to boost its revenues. For the e-commerce giant, the low prices offered by Chinese manufacturers combined with their mass production capabilities will effectively help meet the needs of a large majority of the population.

This partnership with RealMe comes amid an acceleration of Africa’s digital adoption, driven by the ongoing digital transformation. According to the GSM Association, in Sub-Saharan Africa, smartphone penetration should reach 82% in 2025, up from 79% in 2021. The region is, therefore, an attractive market for Realme, which eyes a segment of the African market already roamed by competitors including Samsung, Apple, Transsion (Tecno, Itel, Infinix), Xiaomi, and Huawei.