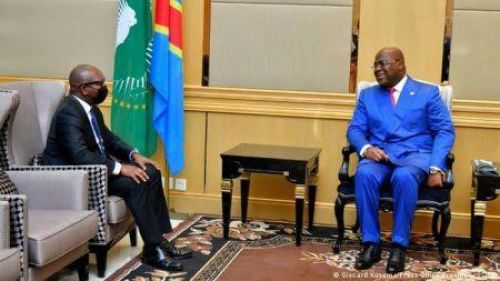 (Ecofin Agency) - In 2020, DR Congo accelerated initiatives for its digital transformation. Its aim is to improve the efficiency of its government and its population’s access to public and private services. However, the lower access to internet services remains a challenge to that ambition.

In DR Congo, President Felix Tshisekedi (photo, right) instructed, Friday (September 9), the operationalization of the universal service fund within a reasonable timeframe. The instruction was given to Prime Minister  Jean-Michel Sama Lukonde Kyenge during the ministerial council held the same day.

The said fund was established by the law n°013/2002 of October 2002 (amended and enacted in 2020), governing the national telecom industry.  According to the law, it should be funded by a 3% levy on telecom operators’ gross revenues.

For the President of the Republic, the universal service fund aims to provide most of the DR Congo population access to mobile telephony by carrying out multifaceted actions. He added that the non-operationalization of that fund prevents the effective management of the financial resources levied in application of the law n°013/2002.

The DR Congo telecom market is currently disputed by four telecom operators: Vodacom, Airtel, Orange, and Africell. According to the latest report from the Post and Telecommunications Regulatory Authority (Arptc), the country has a 52% mobile services penetration rate. This means that a significant proportion of the country’s 92 million population (according to the Digital Report 2022) is yet to access basic telecom services.

By instructing the improvement of telecom access through the universal service fund, President Felix Tshisekedi eyes a broader goal. The government, which is accelerating the country's digital transformation, wants to give a greater number of people access to the internet and the many opportunities in the digital economy by extending network coverage.