The U.S. asks Egypt to block China from its 5G rollout 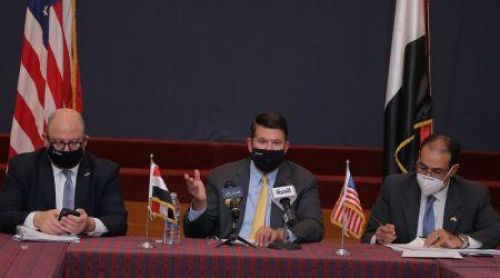 (Ecofin Agency) - The U.S. asked the Egyptian government to ban China’s involvement in the deployment of a 5G network in the country. The information was relayed by middleeastmonitor.com, according to which the US government has also urged Cairo’s authorities to join its Clean Network program to obtain this technology from "reliable partners.”

The Clean Network initiative is the Trump Administration's comprehensive approach to protecting the nation's assets, including the privacy of citizens and the most sensitive corporate information, from aggressive intrusions by malicious actors, such as the Chinese Communist Party.

More than 40 countries around the world and some 60 global telecommunications and technology companies are part of the alliance, including Oracle, Hewlett Packard and Verizon in the U.S., and Telefonica in Spain.

Through its program, the United States wants to further isolate China, with which it has been waging a technological war since 2019. Bulgaria is the last country to have joined the program. Bulgarian Prime Minister Boyko Borisov announced it on October 26, 2020. The country signed the "Clean Network" at the same time as a memorandum of understanding on the use of nuclear energy for civilian purposes.