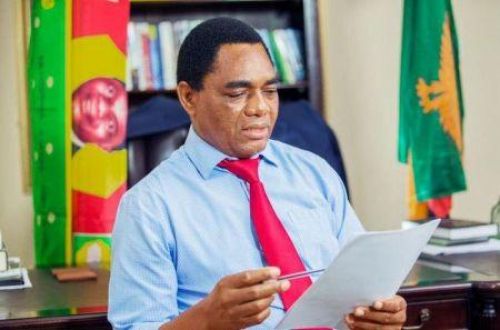 (Ecofin Agency) - Lusaka expects a cancellation of part of its debt by end of June. However, its creditors’ committee co-chaired by China and France, is yet to hold its first meeting.

Zambia and China will work together “to address and resolve debt issue,” According to Zambian President Hakainde Hichilema (photo). In a statement posted on his official Facebook page, Tuesday (May 31), after a phone conversation with President Xi Jinping, Hakainde informs that the commitment was shared by both countries.

“We discussed the potential for greater cooperation and win-win partnerships, the abundant investment opportunities that Zambia offers, and our shared commitment to working together to address and resolve the debt issue,” the post read.

Currently, Zambia is battling a debt crisis. In late 2020, its debt was 120% of GDP. That year, it defaulted on three Eurobond repayments. According to government data, one-third of the country’s US$17 billion debt (in late 2021) is owed to China. Last April, China, which is still not a participating party in the G20 debt suspension initiative, agreed to co-chair Zambia's official creditor committee with France.

Zambia's finance minister has repeatedly expressed hopes that negotiations would be concluded by the end of June 2022. However, the official creditor’s committee is yet to meet for the first time.  Also, in December 2021, the country reached an agreement in principle with the IMF for a US$1.4 billion credit facility. However, the funds cannot be disbursed until creditors agree on reducing the debt to sustainable levels.

With an estimated US$161.9 billion loan to African countries between 2000 and 2021, China is the continent’s largest creditor, according to data collected by Boston University.