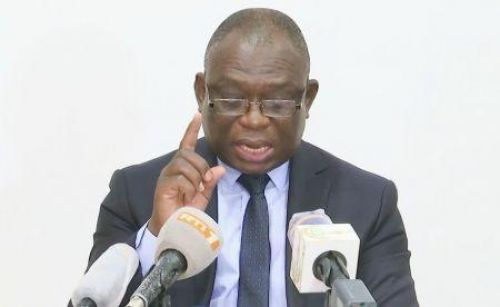 (Ecofin Agency) - The Ivorian government is setting up measures to ensure that the return of former President Laurent Gbagbo is done in a peaceful environment.

Speaking to the media after a meeting with members of the Gbagbo camp, Kouadio Konan Bertin (pictured), Minister of National Reconciliation, said the government takes notice of the choice of June 17 as the date for Laurent Gbagbo's return. “We are working on many aspects because the man who is coming back home is the former President of the Republic. As I always say, we are in a constitutional state. President Ouattara agrees that Gbagbo is free and he can get back home whenever he pleases.”

“We must now work to ensure that it is a peaceful return, that the landing of the plane is done in peace [...] that he is taken home quietly,” the official said.

The return of Laurent Gbagbo on the Ivorian ground was announced last May 31 by Assoa Adou, Secretary-General of the Ivorian Popular Front (FPI). Although the Ivorian authorities said they were not consulted on the choice of this date, the announcement comes in a context of a relaxation of the Ivorian political climate observed since the last legislative elections, which saw the participation of almost all the country's main political parties.

After the release of Gbagbo was confirmed by the International Criminal Court, President Ouattara publicly gave his green light for the return of both his former enemy and Charles Blé Goudé. However, both personalities remain under sentence of 20 years in prison each in different cases, and the current head of state has still not publicly announced whether or not he would pardon his former rival, as requested by pro-Gbagbo.

For the time being, disagreements remain between the current government, which wants a discreet return of the former head of state, and Gbagbo’s supporters, who want to give him a triumphant welcome.