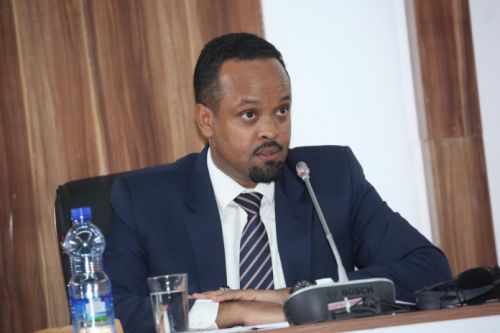 The agreement was signed by Ahmed Shide (photo), the Minister of Finance, on behalf of the government of Ethiopia, and Abdul Kamara, the African Development Bank Group’s country manager in Ethiopia.

The project will kick off in 2020 and be implemented over a five-year period. The ADF grant to land-locked Ethiopia’s road transport sector is part of the Bank’s efforts to boost regional integration and connectivity, especially access to seaports.

The project consists of the construction of the first 60 km of a 4-lane expressway section of the new 126 km stretch from Adama to Awash and includes the design of a one-stop border post at Dewele.

The project will enhance trade by significantly reducing transport costs, thereby accelerating the economic growth of Ethiopia and its neighbour Djibouti, as it is part of the main import-export corridor.

The expressway is expected to improve access to markets for farmers and rural communities. Other beneficiaries include some 3,000 truck-drivers who work the 900 km between Djibouti and Addis Ababa, and youths, who will receive over 95% of the job opportunities during the construction phase.

The Bank’s portfolio in Ethiopia comprises 24 operations worth about $1.7 billion, largely in transport, energy, water and sanitation infrastructure, governance and accountability, private sector, and agriculture and food security. About 32% of the Bank’s operations are in road projects, amounting to $515 million, including four on-going projects covering about 610 km in different parts of the country.