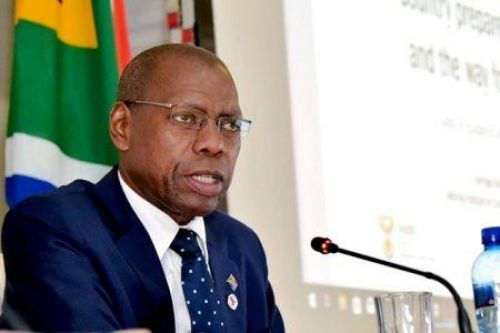 (Ecofin Agency) - South Africa suspended the deployment of the Oxford/ AstraZeneca vaccine after the efficacy test showed it only provides limited protection against the mutated 501Y.V2 variant of SARS-coV-2, which was reported in the country. Announcement was made on February 7th by the health minister Zweli Mkhize (pictured).

The official said this move will enable the government to conduct deeper tests until scientists give new guidelines. Trials by the University of the Witwatersrand in Johannesburg and the University of Oxford on the efficacy of the Oxford/AstraZeneca vaccine against the South African variant of SARS-CoV-2 involved 2,000 participants close to the age of 31 years.

Drug manufacturer, AstraZeneca said the study was limited as participants were all young and none of them developed severe symptoms. This could mean that it will still affect severe illness, although there is not enough data to make a final judgment.

Professor Shabir Madhi, the trial’s principal investigator, says the similarity of AstraZeneca's vaccine to another vaccine produced by Johnson & Johnson, which reduced serious illness by 89 %, suggested that it would still prevent serious illness or death.

There is still some hope that the AstraZeneca vaccine could work as well as the Johnson & Johnson vaccine in a different age demographic group with severe disease, he told BBC.

As a reminder, the South African authorities initially planned to vaccinate health workers soon, after receiving 1 million doses of Oxford/AstraZeneca vaccine from the Serum Institute of India.  Instead, they will offer vaccines developed by Johnson & Johnson (J&J) and Pfizer in the coming weeks, while experts will examine how the vaccine developed by AstraZeneca and Oxford University can be deployed.

Health minister Zweli said “when new information comes to light and viruses change and mutate, decisions have to be made. This may be reponsible for the suspension in the deployment of AstraZeneca's vaccine for the time being. In the next few weeks, South Africa will have J&J and Pfizer vaccine. The country has secured the supply of 9 million doses of the J&J vaccine and 20 million doses of the Pfizer vaccine.

South Africa is by far the most affected country on the continent, with more than 1.4 million cases and more than 46,000 deaths.