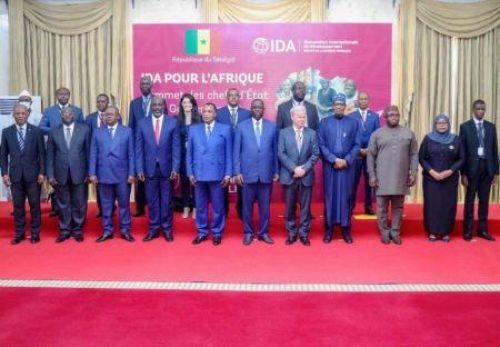 (Ecofin Agency) - The amount to be disbursed to IDA-eligible African countries represents about 70% of the US$93 billion announced for the "IDA 20" program. It is the largest amount of aid the institution ever granted since its creation in 1960.

World Bank’s International Development Association (IDA), dedicated to the poorest countries, will disburse US$65 billion to 39 eligible African countries over the period going from July 1, 2022, to June 30, 2025. The aid was announced during the African Heads of State Summit held in Dakar, Senegal, last Thursday (July 7).

The amount represents over two-thirds of the institution's replenished resources. During the summit, host Macky Sall, incumbent African Union chairperson, suggested the financial resources should be used to address key issues like employment, the development of income-generating activities, reforms in the education sector, building crisis response capabilities, acceleration of energy access projects and provision of quality fertilizers and seeds.

IDA is the World Bank’s institution offering interest-free or low-interest loans to the 74 poorest nations in the world. In December 2021, it completed its twentieth replenishment, raising its resources to a record US$93 billion.

The replenished resources came from developed nations’ contributions, bond issues in capital markets, the World Bank’s contribution, and prior loans’ refunds. The amount of aid to be disbursed to the 39 African countries eligible for IDA financing is the highest it ever granted since its creation in 1960. Since its creation, it has made 19 replenishments. The latest, IDA-19, was launched in December 2019, resulting in a US$82 billion financing package.

Of the 74 poorest countries benefiting from IDA financing, 39 are located in sub-Saharan Africa. Fourteen in East Asia, six in South Asia, four in Europe and Central Asia, eight in Latin America and the Caribbean, and three in the Middle East & North Africa.