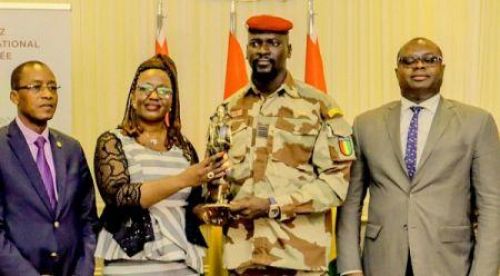 (Ecofin Agency) - The two countries that face, to various extents, common economic challenges want to mutualize their efforts to overcome those challenges.

Last Thursday, during a working visit, a delegation of the Burkinabe government discussed various cooperation axes with the Republic of Guinea. The information was disclosed by the Burkinabe Ministry of Foreign Affairs in a release published on its website on Friday, January 13, 2023.

According to the release, at the end of the working visit with Guinean Prime Minister Bernard Goumou, the two countries agreed to work together to boost their relations. Several sectors are targeted, notably military training, capacity-building, and intelligence sharing.

" Concerning trade, industry and small and medium-sized enterprises, negotiations have been initiated to give Burkina Faso facilities to use the port of Conakry for the transport of its products and equipment and the provision of storage areas for its goods and petroleum products,"  the release informs.

The two countries are under the Economic Community of West African States (ECOWAS)'s sanctions for the recent coups that toppled their presidents. In 2022 for instance, Burkina Faso faced two coups and got suspended from the ECOWAS governing bodies.

The World Bank announced a generally positive medium-term outlook for Burkina Faso (despite a slowdown in its GDP in 2022). It also forecasted a budget deficit for the Sahelian country, which is facing security, social and economic crises.

The Republic of Guinea is led by a military junta since September 5, 2021. For the coup that brought the junta to power, ECOWAS issued a set of gradual diplomatic, economic and financial sanctions against some officials, including President  Mamadi Doumbouya and bis government officials.