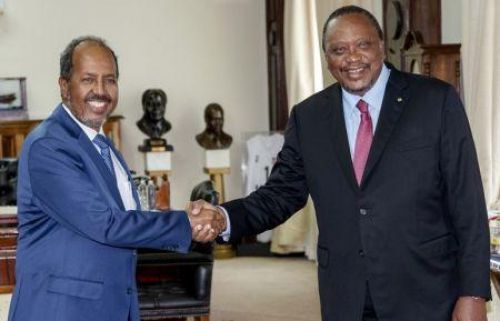 (Ecofin Agency) - For several years, Kenya and Somalia have had a stormy relationship, due in part to disagreements over the delineation of their maritime border. After disturbances aggravated by covid-19, the two countries want to start all over.

Kenya and Somalia will resume diplomatic and trade relations. On Friday, July 15, during a visit by Somali President Hassan Sheikh Mohamud to his counterpart Uhuru Kenyatta, the two leaders signed a series of agreements designed to put years of tension behind them.

The agreements include the resumption of fish and khat -a flowering plant used as an appetite suppressant in the region- trade. Also, Kenya Airways will resume its route to the Somali capital, Mogadishu. The two countries will also ease visa restrictions and reopen common borders.

“The two Presidents recommitted to the fight against terrorism, and to ensure success, they directed the security agencies of the two countries to coordinate their efforts in this fight to ensure the safety and protection of the citizens of both countries, while upscaling the fight against terrorism. [They]  Agreed that Kenya and Somalia will collaborate with other regional and international actors to provide the much-needed humanitarian assistance to mitigate the effects of the current drought in the Horn of Africa region,” reads the joint release issued after the meeting.

For several years, Nairobi and Mogadishu have had a stormy relationship because of their maritime borders in an oil and fish-rich zone in the Indian Ocean. In October 2021, the International Court of Justice (ICJ) ruled in favor of Somalia.

Let’s note that the July 15th visit is the first made by President Hassan Sheikh Mohamud since his election as Somalia’s president last May.