The U.S. backs development projects in Senegal with $1bln 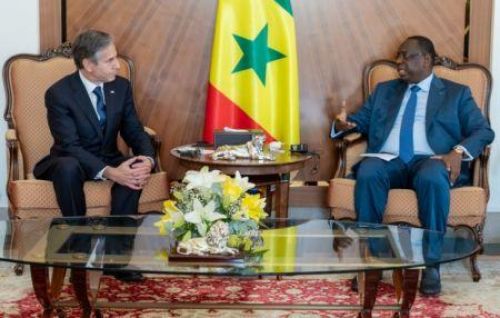 (Ecofin Agency) - Following his trips to Kenya and Nigeria, the U.S. Secretary of State Antony Blinken ended his African mini-tour in Senegal. With Senegalese authorities, the U.S. envoy discussed security challenges in West Africa and explored ways to strengthen cooperation in various areas.

The United States has signed new memoranda of understanding worth $ 1 billion with Senegal. The announcement was made on Twitter by U.S. Secretary of State Antony Blinken (pictured, left), during his visit to the country.

The deals cover various areas including security and infrastructure. According to Senegal's Minister of the Economy, Amadou Hott, they consist of a "project to deploy critical network services for public safety" and the installation of 375 traffic lights in Dakar. In addition, a highway will be built between Dakar and Saint Louis and a bridge will be built in Ziguinchor.

Senegal has for several years been considered one of Washington's main gateways to Francophone West Africa. The country was the only Francophone county visited by Antony Blinken during his African tour. Between 2012 and 2019, exports from Dakar to Washington increased from $16.8 million to $132 million, while U.S. exports to Senegal rose from $149.3 million to $198 million over the same period. In 2020, during the Covid-19 pandemic, bilateral trade between the two countries stood at nearly $400 million.

“The U.S. investments in Senegal have increased significantly in recent years. 50 U.S. companies are currently active here. And the number continues to grow. Even today, I witnessed the signing of several memoranda of understanding between the Senegalese government and four U.S. companies. These deals will implement key infrastructure projects that will benefit the populations in both our countries through job creation and environmental protection. I think that will make a difference in people's lives in the future,” Blinken told journalists.

According to the official, discussions are also underway with the Pasteur Institute of Dakar to locally develop vaccines against covid-19 in Senegal. As a reminder, the German laboratory BioNTech had already chosen the West African country to host, with Rwanda, its vaccine manufacturing plants on the continent. While the American firm Moderna is also planning such a project in Africa, Senegal remains on the list of countries that could host this plant.