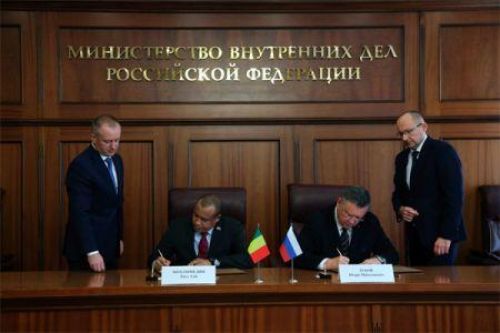 (Ecofin Agency) - Russia and Mali are pursuing a rapprochement, which is increasingly criticized by Western governments. The latest development in the two countries’ cooperation is Mali’s Interior Minister traveling to the Kremlin, at the invitation of his Russian counterpart, to sign agreements.

The agreement was signed during an official visit to Moscow by the Malian Minister of Security and Civil Protection, Daoud Aly Mohammedine, at the invitation of his Russian counterpart. "During this working visit, the two ministers proceeded to the signing of a Cooperation Agreement […] covering, among other things, Security, Intelligence, risk and disaster management, the fight against drugs, and staff training," Malian authorities informed without expanding further.

"The two ministers reaffirmed their firm commitment to strengthening security cooperation between Mali and the Russian Federation," the release announcing the agreement adds.

This agreement is in line with the rapprochement observed between Moscow and Bamako since Colonel Assimi Goita seized power.  This rapprochement, disapproved by Western Countries, led to a gradual break in Mali’s security cooperation with several European countries, starting with France.

France accuses Russia of supplying mercenaries, through the paramilitary group Wagner, to Mali to help it fight terrorists. However, Malian authorities are still denying the accusation.

Since 2021, the number of equipment granted by Russia to help the Malian army fight jihadists is ever-rising. Malian transitional authorities claim major successes in the fight against those jihadists, thanks to Moscow. Nevertheless, the security crisis remains a major concern in the country, which never succeeded in stifling the terrorist threat in the eight years of French presence, through the Barkhane force.

The agreement comes amid a diplomatic row between France and Mali following the suspension of French development aid.

Let’s note that during the working visit, the Russian Minister of the Interior also granted several training scholarships to the Ministry of Security and Civil Protection of Mali "in several areas".