Côte d'Ivoire: Belarusian and Ivorian pilots sentenced in Paris over bombing of French camp in Bouake 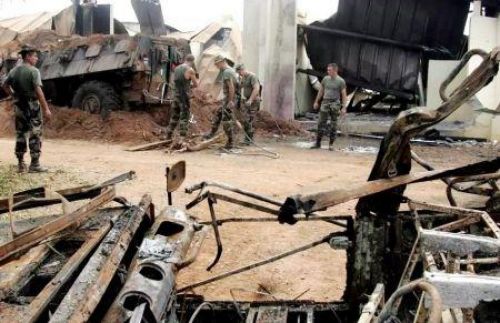 (Ecofin Agency) - The trial of three suspects in the bombing of the French camp in Bouake in 2004 opened yesterday March 29 at the Criminal Court of Paris. The three men are accused of leading the attack that took the lives of nine French soldiers and one American civilian.

The Belarusian mercenary Yury Sushkin and the Ivorians Ange Magloire Gnanduillet Attualy and Patrice Ouei will be sentenced in absentia at the end of a trial that is already causing a stir. Many grey areas remain unclear, and the plaintiffs from the families of the victims are suspecting a plot.

The events are linked to the Ivorian crisis of the 2000s, between the rebel-defended north of the country and the south loyal to President Laurent Gbagbo. In early November 2004, Gbagbo launched an air offensive against rebel positions in the north, under the eye of French forces of Operation Licorne, which had been deployed between the two camps since 2002 to prevent a civil war.

Everything changed on November 6, when at around 1:20 p.m., two Ivorian fighters flying over a French camp in Bouaké in the center of the country fired rockets to the surprise of everyone. The attack cost the lives of ten people and injured about forty.

But the affair, which served as a pretext for the French army to destroy the Ivorian air force, did not end there. The next day, a group of Russian, Belarusian, and Ukrainian mercenaries that could potentially include suspects was arrested by French soldiers, but released four days later. On November 16, 2004, eight Belarusians from Côte d'Ivoire, including Yury Sushkin, were arrested in Togo, which notified the French authorities. Curiously, Paris asked that they be released.

17 years after the events, the main suspects are still on the loose. Even if they are sentenced, the three pilots targeted by the trial that begins in Paris will not be present, because they were never arrested. The families of the victims, as well as many Ivorians who expressed their hostility towards France after the reprisals against the Ivorian air force, denounced a "French manipulation.”

According to them, the government of the time tried to simulate an attack on its soldiers to trigger a French reaction against Laurent Gbagbo, who was not known to be a "friend" of France. Unfortunately, things got out of hand, the conspiracy theorists say, adding that since then, Paris has been trying to hide the truth and the people behind the attack.

"This trial could have been finished in 2005, at most in 2006. We could have eventually known exactly who the sponsors were, who we don't know at all even now. Why don't we know them? Because we have done everything possible not to know them. And when we do everything to not know the sponsors, we ask ourselves questions. Who are the real people responsible for the bombing of Bouaké? All the while knowing that Laurent Gbagbo had nothing to do with it, and they knew that from the very first moment," said Jean Balan, one of the lawyers for the civil parties.

Although Franco-Ivorian relations have improved significantly since Alassane Ouattara came to power, the blurred background to this case continues to fuel rumors. It remains to be seen whether this trial will provide answers to questions that have been raised for 17 years, or whether it will generate new questions.