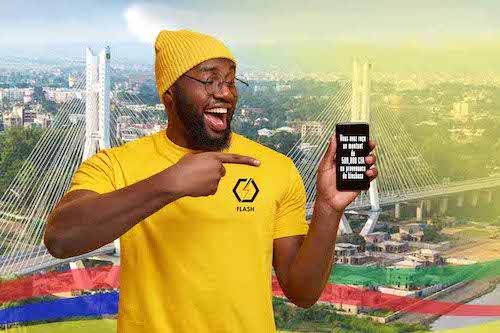 ( FLASH ) - Access to a traditional bank account remains difficult for a large segment of the population in Africa, which does not facilitate international transfers of funds from one bank account to another. Today, mobile money is an alternative to bank accounts and an asset to facilitate money transfers in Africa.

MTN Congo is the leader in mobile money in Congo-Brazzaville, which offers these services to millions of people in cities and especially in the most remote areas where there are no banks nearby. Accessing your money from your mobile, sending money to loved ones, paying your everyday expenses, and receiving your salary on your mobile phone are the innovations that MTN-money has been able to bring to the Congolese populations.

And to allow its subscribers to receive money from DR Congo, MTN-Congo has entered into a partnership agreement with FLASH. This partnership creates a bridge between Congo-Brazzaville and Congo-Kinshasa and will allow individuals to transfer funds from DR Congo via Flash Cash directly to an MTN MoMo account in Congo-Brazzaville at the cost of only 1 USD whatever the value of the amount to be transferred.

Flash has a network of over 160 branches and nearly 4000 Flash agents in DR Congo where its Flash Cash service is available. In addition, its FlashApp mobile application also gives users access to this service directly from their smartphones and will allow them to transfer money from home to an MTN MoMo account without going to a Flash agency.

Flash International is a regulated financial company working in FinTech. It provides the aggregation of value-added and financial services such as: money transfer, mobile money, Visa cards, bank transfers, mobile top-up, internet packages, television subscriptions, payments of taxes and merchant payment services for more than 3 million customers in the Central African region through its network of 160 own agencies and thousands of Flash agents. The FLASH distribution platform and financial hub has more than 30 different products in its innovative application “FlashApp” available on Google Play and on Apple Store. This mobile application is already operational in 3 African countries, Flash International currently has around 4,000 Flash agents who actively participate in the financial inclusion of unbanked communities. For more information visit http://www.flash.one/

MTN Congo SA is a subsidiary of the MTN group with its head office in South Africa. Launched in 1994, the MTN group has become, over the years, an international brand and has acquired great notoriety. Now listed on the Johannesburg Stock Exchange, this group, which began to expand in 1997, is now present in 22 countries from Africa to the Middle East. Launched in Congo in 2011, the MTN Mobile Money service quickly became the leader in the money transfer market in the country with more than 1,783,613 active customers. MTN Mobile Money has built its success on the accessibility and universality of service enabling millions of people excluded from the formal financial system to conduct financial transactions instantly, securely and reliably using mobile phones.