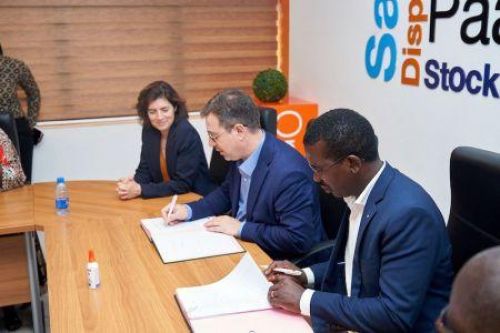 (Ecofin Agency) - In Africa, demand for broadband internet is accelerating, prompting telecom operators to strengthen their infrastructure to capitalize on that demand.

Telecom operator Sonatel announced, Tuesday (July 19), that it had won a contract to connect Senegal to a fifth subsea cable, Meta’s 2Africa namely. The announcement was made during the first African visit carried out by Christel Heydemann (photo, left), the new CEO of Orange Group, Sonatel’s parent company.

The 2Africa project was officially launched in May 2020 in response to the exploding demand for broadband connectivity in Africa. It was announced in February 2020 by a consortium consisting of Meta (then Facebook), China Mobile International, MTN GlobalConnect, Orange, STC, Telecom Egypt, Vodafone, and WIOCC. Alcatel Submarine Networks was said to be in charge of its deployment.  The 45,000 kilometers long infrastructure is expected to be operational between 2023 and 2024.  Its commissioning should enable Sonatel to significantly increase its broadband connectivity capacity to meet growing demand. The new infrastructure should also facilitate the deployment of 4G, 5G, and fixed broadband access.

The new cable will add to the four subsea cables already operated by Sonatel,  SAT-3, ACE, Atlantis-2, and SHARE namely. Recently, Sonatel upgraded its Rufisque data center by adding a second room. These investments are part of the Orange subsidiary's ambition to provide the highest quality services in Senegal and cover every region with 4G by late 2023.