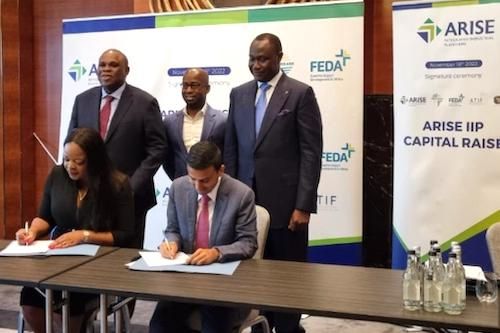 (ARISE IIP) - ARISE Integrated Industrial Platforms (ARISE IIP), the pan-African infrastructure developer and operator, is proud to announce a strategic fundraising for an amount of $85 million with the signing of a convertible loan note subscription agreement. The fundraising has been supported by the company's new partner the Fund for Export Development in Africa (FEDA), the development impact investment platform of African Export Import Bank (AFREXIMBANK).

With this fundraising, ARISE IIP confirms its ambition to support Africa’s industrialization and economic development, while keeping a strong commitment to environmental sustainability. This $85 million fundraising was achieved through the signing of convertible loan note subscription agreement with FEDA. The conversion of the loan notes into ordinary shares in ARISE IIP’s capital can occur during the conversion periods specified under the agreement.

ARISE IIP has recently accelerated its expansion across Africa, with the signing of five new agreements this year to develop twelve special economic zones across 5 countries, as follows:

For the past few years, ARISE IIP has experienced a remarkable expansion across Africa, with currently over a dozen integrated industrial zones accelerating the continent’s industrialization.

For reference, in Gabon, ARISE IIP manages the Gabon Special Economic Zone (GSEZ) which focuses on the timber industry, and has created 16,000 jobs, attracted 120 investors, and enabled Gabon to move from being an exporter of logs to the world's 2nd largest producer and exporter of veneer, as well as the first in Africa.

In Benin, ARISE IIP operates the Glo-Djigbé Industrial Zone (GDIZ) dedicated to the local transformation of agricultural product including cotton, cashews, pineapples, shea nuts and soybeans, among others.

ARISE IIP also manages the Adétikopé Industrial Platform (PIA) in Togo which concentrates on the local transformation of agricultural product.

In addition, ARISE IIP has undertaken the building of two economic zones in the Republic of Congo and one zone in Ivory Coast. Moreover, the pan-African infrastructure developer and operator is currently developing other assets in Nigeria, Rwanda, Chad and in the Democratic Republic of the Congo.

Gagan Gupta, Founder and CEO of ARISE IIP commented: “This agreement marks a new stage of Arise’s development in Africa. It will lead to the creation of an African champion of infrastructure development. I would like to extend a warm thank you to our trusted partners in this project, the FEDA.”

Marlène Ngoyi, CEO of FEDA, commented: “Our investment in ARISE IIP demonstrates FEDA’s ability to invest in opportunities that will drive the structural transformation of trade on the continent. ARISE IIP is a key player that supports Africa’s local manufacturing and trade with the rest of the world. It echoes the FEDA’s DNA to provide equity capital with a focus on delivering development impact in diverse sectors in Africa which are critical to driving intra-African trade and value-added export development.”

Prof. Benedict Oramah, President and Chairman of Afreximbank, said: “We are very pleased with this strategic fundraising, which marks a critical step to support ARISE IIP’s rapid growth in Africa, and more broadly, to advance Africa’s industrialization.”

Samaila Zubairu, Chairman of ARISE IIP board and CEO of the Africa Finance Corporation (AFC) also welcomed the announcement: “We are thrilled with this key fundraising for ARISE IIP. Our trusted partner has a proven track record of delivering large-scale projects across Africa and we are confident in their ability to generate added value for African countries' economies.”

ARISE Integrated Industrial Platforms (ARISE IIP) is a pan-African developer and operator of world-class industrial parks committed to making Africa thrive. We identify opportunities in commercial and industrial value chains across Africa, and conceive, finance, build and operate the necessary infrastructure, playing a catalytic role in supporting countries to transition to an industrial economy. We are driven by the pursuit of green growth; our ambition is to unlock the continent’s industrial potential while neutralising our carbon emissions and climate impact. ARISE IIP is currently present in Benin (GDIZ), Togo (PIA), Gabon (GSEZ), Côte d’Ivoire (ZIC), and more. GSEZ won the Honourable Mention and High Recommendation of the Financial Times' fDi Global Free Zones of the Year 2022.

Headquartered in Kigali (Rwanda), the Fund for Export Development in Africa (“FEDA”) is the impact investment subsidiary of the African Export-Import Bank (“Afreximbank” or the “Bank”) set up to provide equity, quasi-equity, and debt capital to finance the multi-billion-dollar funding gap (particularly in equity) needed to transform the Trade sector in Africa. FEDA pursues a multi-sector investment strategy along the intra-African trade, value-added export development, and manufacturing value chain which includes financial services, technology, consumer and retail goods, manufacturing, transport & logistics, agribusiness, as well as ancillary trade enabling infrastructure such as industrial parks.

African Export-Import Bank (Afreximbank) is a Pan-African multilateral financial institution mandated to finance and promote intra-and extra-African trade. Afreximbank deploys innovative structures to deliver financing solutions that support the transformation of the structure of Africa’s trade, accelerating industrialization and intra-regional trade, thereby boosting economic expansion in Africa. A stalwart supporter of the African Continental Free Trade Agreement (AfCFTA), Afreximbank has launched a Pan-African Payment and Settlement System (PAPSS) that was adopted by the African Union (AU) as the payment and settlement platform to underpin the implementation of the AfCFTA. Afreximbank is working with the AU and the AfCFTA Secretariat to develop an Adjustment Facility to support countries in effectively participating in the AfCFTA. At the end of 2021, the Bank’s total assets and guarantees stood at about US$25 billion, and its shareholder funds amounted to US$4 billion. Afreximbank disbursed more than US$51 billion between 2016 and 2021. The Bank has ratings assigned by GCR (international scale) (A), Moody’s (Baa1), Japan Credit Rating Agency (JCR) (A-) and Fitch (BBB). The Bank is headquartered in Cairo, Egypt.