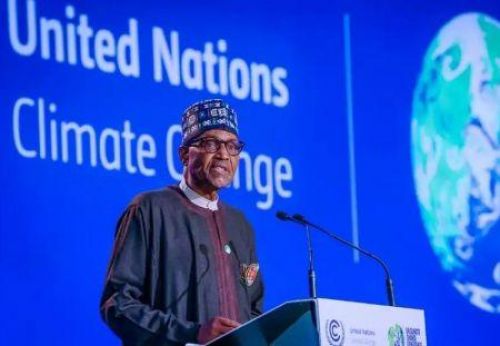 (Ecofin Agency) - Like other African countries, Nigeria is stepping up initiatives to fight global warming. The largest oil producer in Africa says it wants to hit net-zero by 2060. The announcement was made last November 2 by President Muhammadu Buhari (pictured) at the UN Climate Change Conference in Glasgow, Scotland.

Achieving this objective will require an investment of about $400 billion, Buhari said. And Bloomberg reported, citing official sources, that $310 billion of the amount will be spent on building electricity generation, transmission, and distribution infrastructure and $75 billion on buildings. Buhari also urged partners to support his country’s ambition through financial assistance, technology transfer, and capacity building.

According to a USAID report, Nigeria accounted for only 1.0% of global greenhouse gas (GHG) emissions in 2014. The country will have to move toward greener resources, to reach its net-zero ambition by 2060.

In April, Nigeria revealed plans to convert one million vehicles to natural gas by 2025 to limit the use of non-eco-friendly fuels in transport and to reduce greenhouse gas emissions. However, President Buhari, during his speech at COP 26, called for the lifting of the embargo on investment in African fossil fuels. He stressed that his country is committed to eliminating illegal gas flaring by 2030.

The Nigerian president says he hopes developed countries will live up to the commitments they made at COP 21 to developing and emerging countries. These commitments include climate-friendly investments, especially in clean energy, green infrastructure, and technological innovation.