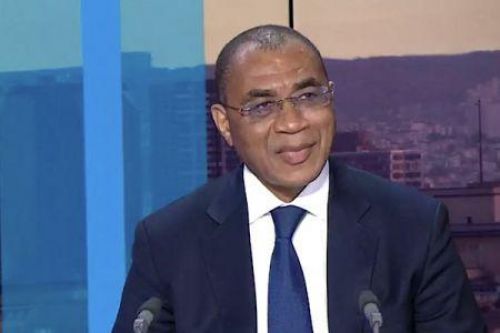 (Ecofin Agency) - In an interview with France 24, the Ivorian Finance Minister Adama Coulibaly looked back on the recent international summits held in Paris and Rome, respectively on the financing of African economies and global health. The Ivorian official highlights the need to help African countries accelerate their vaccination campaigns against Covid-19.

“There is a need to start producing the vaccine on regional levels so that there are more doses available for populations,” he said. Africa must have its vaccine production centers to catch up with other continents, Adama Coulibaly argued.

According to him, achieving such an objective requires the involvement of the international community and the International Monetary Fund (IMF). He calls on these international bodies to substantially increase the aid they provide to African countries in their vaccination campaigns. "Today, $25 billion is available. If we increase to $50 billion, we can effectively double the number of people vaccinated by the end of the year," he said.

He also pointed that the patents and property rights that hinder the “liberalization” of vaccine production on a global scale need to be lifted. Defended since the end of 2020 by several Southern countries, led by South Africa and India, this strategy is at the center of the debate and even pits the rich countries that monopolize vaccine production against each other. While U.S. President Joe Biden has openly supported the lifting of patents on Covid-19 vaccines, his position has been greeted with skepticism by the countries of the European Union, while the pharmaceutical labs seem fiercely opposed to such an initiative.

“The World Trade Organization was charged with handling these patent and property right matters so that, even if it’s temporary, Africa is authorized to produce vaccines locally,” the Ivorian official said, adding that Côte d'Ivoire is ready to become the hub for Covid-19 vaccine production on the continent. The strategy is aimed at increasing the vaccination rate in Africa to 40% in the next six years, from 5% currently.

Adama Coulibaly also discussed the challenges African countries are facing in reviving their Covid-affected economies. He believes that the initiative which aims to grant African countries $100 billion in Special Drawing Rights is a milestone although it won’t be enough to settle the issue.

“Based on the quota of African countries, the continent will capture $33 billion of the $650 billion that are planned [...] But sub-Saharan Africa will only get $24 billion out of this amount. The WAEMU area, which covers eight (8) countries, will be granted only $2.2 billion out of which Côte d'Ivoire will receive $900 million," said the Minister who considers these funds insufficient, like many experts and observers. "It is important to mention that Africa is not only faced by the pandemic. Many African countries are also dealing with terrorism. There is climate change and then there are the economic recovery efforts that need to be put back in place. All of these require significant resources," he adds.

This statement comes a few weeks after President Alassane Ouattara made a statement at an event commemorating 60 years of the IMF's Africa Department. The leader called on the Fund to be more flexible towards African economies, to enable them to meet their challenges.

Despite these multiple challenges, some African countries have proven particularly resilient during the health crisis. Côte d'Ivoire achieved a 1.8% growth last year in an environment marked by a historic economic recession for sub-Saharan Africa. This year, Adama Coulibaly expects the economy to rebound to 6.1%.