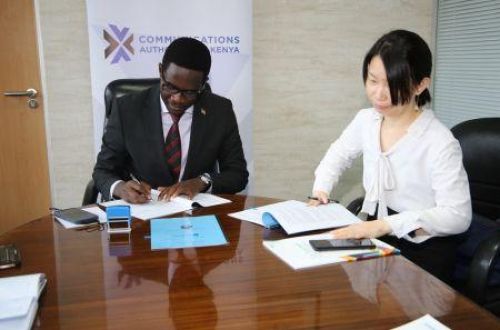 (Ecofin Agency) - Last February, the communications authority announced its intention to deploy the 5G in Kenya this year, bringing ultra-high connectivity to the population in a context marked by growing demand.

The Communications Authority of Kenya (CA) announced, Thursday (June 23), a technical cooperation agreement with Huawei, with immediate effect. Renewable every five years, the agreement covers the deployment and extension of the fifth-generation mobile network across the country. According to Ezra Chiloba (photo, left), CA’s director-general, the agreement also covers the introduction of new advanced technologies in the country, training, artificial intelligence, and cybersecurity.

Last February, the communications authority released a roadmap outlining the deployment of 5G technology in Kenya. At the time, it said it would allow pilot projects this year by allocating 5G spectrums to operators. In May, 60 MHz of spectrum in the 2600 MHz band was allocated to Safaricom for commercial 5G deployment.

In March, Kenya and Huawei signed an agreement to boost ICT capacity. "We appreciate the commitment and support provided by Huawei not only to developing Kenya's ICT infrastructure but also in elevating ICT skills across various levels," cabinet secretary Joe Mucheru said at the time.

Let’s note that Kenyan operators are investing in the 5G, since 2021. However, some obstacles such as the high cost of 5G-enabled cell phones are slowing the process. According to Peter Ndegwa, managing director of Safaricom, 5G-enabled  cell phones are currently retailed at more than Ksh100,000 (about US$860), which is quite high for average users.